"As beautiful and ambitious as the sea." 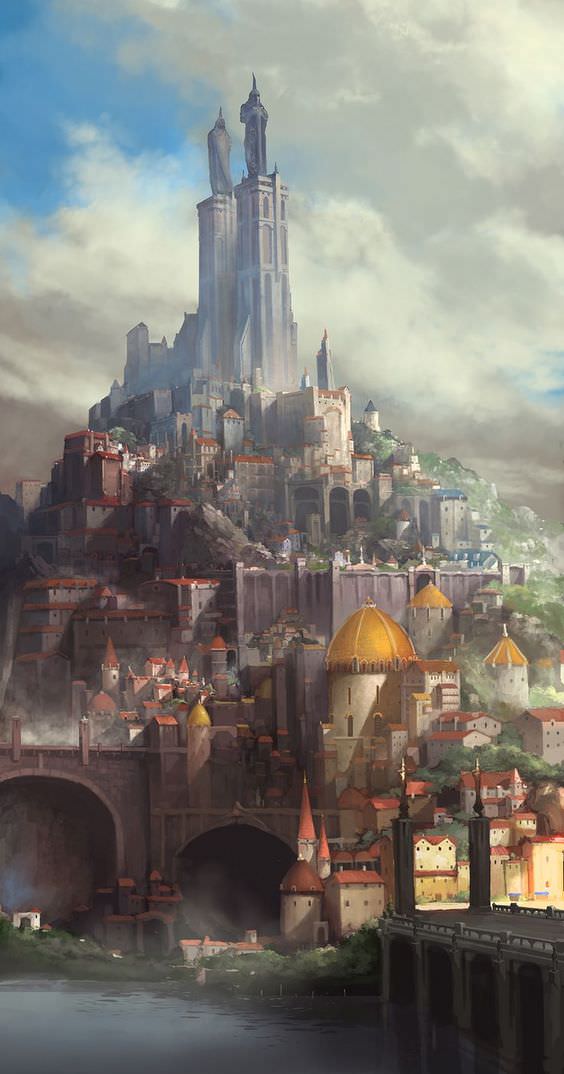 Flag:  Silhouette of a white falcon over a blue sea with a black background

The pride of the Great North extends out from land to sea. Coastal Grande is the largest city in all of Genesaris and by far one of the most beautiful, second only to Aelindra City in size and glory. No missions of conquest have ever touched Coastal Grande, and it has only grown in strength. As a result, Northern residents tend to be arrogant and overt, looking down on those of more modest cities and towns.

Despite the undercurrents of racism and cultural stigma, no one can deny that Coastal Grande is one of the best tourist areas and resorts. The economy is exceptionally strong, allowing for splendid hotels, restaurants, and luxuries rarely found anywhere else. Due to the city’s relationship with the sea, high-class seafood is incredibly popular and has been shipped out continent-wide, resulting in a great surge of income for the government. The Great North has used this to strengthen their magitech and military, which has caused some worry in lands with a history of war with the North.

Situated on both land and sea within the Great North of Genesaris, Coastal Grande boasts a wide range of historical buildings scattered among temples, towers, old and new houses, and continuously growing streets and roads. Small estates are popular in Coastal Grande, some containing small plots of land while others are limited to the interiors of forts or smaller manors. Many citizens and tourists alike live in large apartments overlooking the sea – some of these abodes are built on the sea itself!

As the capital of the Great North, Coastal Grande is a dream of architectural brilliance and creativity. Even the simplest house may boast a wonderful design done by an artistic hand; perhaps a intricately woven fence, a filigreed door, windowpanes carved of alabaster and chase with gold to name only a few possibilities. The temples and places of worship are even more elaborately decorated with stained glass and astonishing statues of gods and various deities.

Coastal Grande is one of the few cities that never experiences the savage winters Genesaris brings upon many other cities, towns, and villages. Instead, it is bestowed with endless summer. Flowers bloom all year round, and the sea is warm, if not always perfectly kind. Tsunamis and floods do occur, but the city protects itself with magical shields and walls that may rise and fall to admit the waters or block dangerous, high-rising waves.The rare Magestorm may bring with it an occasional but often short-lived chill, and the sun returns to thrive with long days and warm, active nights. The only sign of any other season may be a few trees turning copper and gold before losing their foliage, but Coastal Grande’s winter is a comfortable warmth with refreshing breezes and cool dips in the water. Their hottest summer days may reach into the triple digits, but rarely so, usually steadying at a pleasant 75-85F degrees.

Gold and silver trees from Nvengaria, strange cactuses from the Velhatien Desert, odd plants from the Cold Mountains are all grown in the plentiful gardens available in Coastal Grande, keeping the city alive and flourishing with the hand of nature among artificial buildings and manmade monuments. Roses are popular to grow, their colors ranging from the traditional red to deep purples and pure whites. Despite the salt prevalent in the sea, plants thrive with the help of man who seek to prove their harmony with nature.

Herds of animals such as oxen, sheep, and goats are kept on the outskirts of the city inland, providing food, pelts and leathers as well as other materials. Farther in the city and extending out to sea are colorful songbirds, spoiled by seeds and other leavings by men, women, and children who admire their gift of flight and their rainbow feathers.

The waters are full of fish and stranger sea creatures, providing a constant stream of seafood. There are occasional rumors of sea serpents and water dragons, but accidents and deaths from these dangerous anomalies are rare. When they do happen, mercenaries and soldiers are called in and the matter hastily dealt with.

Coastal Grande is heavily populated, but the careful situation of buildings keep it from seeming too crowded. It is a favorite tourist hotspot, however, with people from all over Genesaris and beyond coming to enjoy the fair weather and view the ocean from the comfort of a rented home. Architects, artists, and scholars all find a comfortable living in Coastal Grande, which values the trades of all three.

Coastal Grande thrives on its trade in fish and general seafood, along with other trades such as licensed art. A fair bit of income in gold and silver come from the tourists who pay heavily to see all the sights Coastal Grande has to offer, which includes shops that sell everything from elaborate clothing to fancy souvenir and books for the more scholarly traveler. Many engineers living in Coastal Grande find their creativity and genius blooming here, selling their designs and technology to other cities while in the employment of the Coastal Grande government, further bolstering the capital’s wealth.

Coastal Grande’s popular spots are its taverns and wide range of shops, but it is not lacking in natural parks and reservations for those more inclined to mingle with the trees. These parks, often filled with wonders of vegetation, orchards, and pools of water, are smaller than those that may be found elsewhere in Genesaris, but they are numerous here. One need never go too far to find these places of comfort and peace – and often solitude, for most appear to favor the taverns.

A cross shaped tavern that is divided into three dining sections; the rich, the not so rich, and a place where both can mingle. A cause of controversy, the only thing everyone agrees on is that Yum Janus has an incredibly high standard of food and service. With prices from the modest to the insane, even the cheapest of meals leave the hungry satisfied. Due to its popularity, the Yum Janus company has spread to nearly every city, but this is where it all began.

Situated out from land to sea and therefore protected quite well against mainland attacks, a fair number of airships languish like shining gems on the surface of the clear waters and concrete bases built to last. Shining gems though they seem, they are all outfitted with some of the finest weaponry possible. In contrast to the tear and jet-shaped airships of modern times, these take a more revolutionary approach; spirals stacked on top of one another and sustained by curving pillars, making them taller rather than wider. They also have a fleet of sea ships.

Regent: Valerie Valmer. With the death of Bailey Valmer, she rules with a strong hand and a firm guidance. Some doubt her legitimacy as ruler, but none doubt that she has only the best in mind for Valjer City.

Education in every art is supported in Coastal Grande, from traditional painting to architecture to engineering to creative writing. It is exceedingly rare to find a citizen who cannot read, write, or count to a high degree; in fact, the city somewhat looks down on those who can’t. There are universities, both profit and non-profit available to support specific majors, with scholarships offered to those who excel in general education at a younger age.

Roads and paths: everyone walks.

Horses and mounts: there are pathways and stables for horses and other mounts.

Private airships: small airships and hovercrafts are available for those who can afford them.

Crossroad gates: for wide-city travel and international as well, there are gates at the corner of every district within the city: North, South, East and West.

Aselus Reonvar owns the biggest estate in Coastal Grande, offering hosting parties in his miniature castle and rather flamboyant courtyard. He is very popular to go to for money grants and loans, as well as other favors…

Coastal Grande is an old city, beginning with a simple village that settled on the coast, drawn by the warm weather and beauty of the ocean. Overtime, it began to grow with people coming in from all over the land, and by their combined efforts the village grew into a town, then a city that expanded its territory into the water itself. The Council of Eight is long-standing tradition for the government that has been upheld and supported ever since rulership was discussed.