"Work for your pride, honor, and freedom. Ride it as your ride your horse." 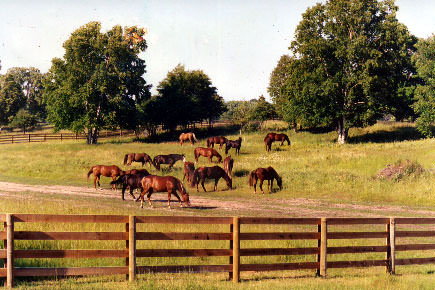 The Ones Who Hunt: Kethlerin City

Flag: A silhouette of a charging horse with an archer mounted, against a dark green flag.

A large, more-village-than-city based around fields and agriculture. At first glance Kethlerin seems to have nothing to boast with their crude cabins of wood, clay, and grass and lack of magitech. This is quickly proven false, however, as any traveler knows of Kethlerin. Kethlerin is famous for their horses, carefully selecting and breeding the finest mounts in the land. The best of armies acquire their war horses here, provided with a large selection from massive draft horses to the lean, wild-blooded black and white striped horses.

Anyone who comes to visit on a horse will immediately be studied and judged based on the condition of their horse, and a beating for mistreating a horse.

Kethlerin sits on the very border of that separates the Arcane East, the Great North, and the Midlands. Formerly, Kethlerin owed its loyalty to the Midlands and so was part of that government, but lately has given pledged loyalty the Arcane East under the supreme rulership of the Blood God, Sauriel – commonly known to them as the Black Hawk.

A long yet quite rickety gate lines the grasslands that separates Kethlerin’s village from the hunting grounds they also call theirs, which includes the dense forests to the farther east. Deer, wild oxen, buffalo and other wild game roam these lands, hunted for food, fur, and fat with invariable success by the skilled hunters of Kethlerin and their horses.

Kethlerin has little to boast of when it comes to grand buildings and sophisticated technology. In fact, they have almost none, with their few buildings made of chopped wood, baked clay, and grass, sometimes supplemented by rocks to reinforce the foundation. Most of Kethlerin’s hardy hunters live and sleep under the night sky. If it rains, they either endure or take shelter in the cavernous wooden feasting hall at the heart of their city.

In the immediate area, grasslands and farmlands make up the majority of Kethlerin’s healthy land, whose soil is perfect for growing crops of all kinds. Vegetables and some berries are often grown in the uneven blocks of farmsteads, lined be fences to prevent horses from trampling the crop. To the east, thick woodlands rise up, wild and untamed, growing to the base of the farthest Bloodmage Mountains. Creatures of all kinds dwell here, providing plenty of sustenance for Kethlerin’s inhabitants. To the north is a lake where they draw and water much of their horses and themselves.

As a village settled between lands, Kethlerins’ climate varies troughout the seasons, usually experienced each in turn. Summer is pleasantly warm, though sometimes unbearably hot with draught, forcing them to draw heavily from the water in the northern lake or even from other cities with water systems more reliable than theirs. Spring is warm and wet, while autumn and winter come with a variety of sun and clouds, rain and occasionally, during very cold days, snow. As a whole, the seasons are bearable and lived well by the Kethlerins, who describe their own temperatures and climates as perfect.

The grasslands sport little variation in plant life, while the woodlands of the east boast a variety of the common and rare herbs and vegetation sought after by mages and healers. These woodlands, dominated by oak and yew, provide coverage for all sorts of animals, usually the common game such as deer and wild elk but known to sometimes provide shelter for more mystical beasts like great wyrms and manticores. Buffalo, wild oxen, and wild horses roam the flat grasslands, hunted often by the village.

Due to culture and tradition, horses are the most common beasts of Kethlerin, gathered into large groups and broken by skilled and focused herders who don’t keep any pets and look upon alliances with other beasts with skepticism and a little bit of awe. Horses of all types are gathered and bred; Paints, Thoroughbreds, Appaloosas and more are just a fraction of their breeds. While grimly herded and tamed, it is important to note the horses are never mistreated. Abusing a horse is considered a crime, and needlessly killing not only an insult but punishable with death.

Kethlerin’s fence is wide open for anyone who wishes to enter, but the society of the village itself is somewhat unfriendly and suspicious of outsiders. Men and women both are proficient hunters and warriors, ready to defend their home and horses at any cos, ready to ride into battle at a moment’s notice. Their leader, known as the Wavemaker, has only since increased their nearly hostile outlook, and visitors are impatiently tolerated at best. The village wishes only to be alone, but this wish is rarely granted due their prized mounts. Their steeds draw in those who wish some of these breeds to be their own, the latest being Umbra, Capital of the Arcane East.

Kethlerins live by trade and mutual support. Crops, pelts, horses and other natural supplies are used instead of silver and gold, with precious metals being looked upon as pretty oddities and little more.  For all this – perhaps because of this – Kethlerin has never seen actual poverty or been in need. The closets they come to being in need is when water is scarce in summer droughts, and even then they always manage to repay the city that helps with their water supply, giving horses and furs in bountiful profusion… even warriors, if the pay was high enough.

Kethlerin’s grasslands ad woods are free for all its civilians to wander in peace if wished. There is no restriction for anyone, not even children save for rules and curfews set forth by their parents. As far as taverns and shops go, however there is little. There is a building where extra furs and supplies are kept, guarded by two Elite Hunters, and another where extra armor and weapons are stored, but none of these are for sale. Kethlerin’s see no worth in money.

Northern Horse Field: Centered to the north, this wide field is where most horses are kept, free to roam in herds and watched over by several riders not busy farming or hunting. Horses of all colors graze here, varying in size. There is a fenced-in area nearby where wild horses are taken and tamed with an extremely low fail rate. Nearby, there is also a gated shooting range for hunters wanting to practice their skill, filled with targets of all sizes and materials.

Eastern Horse Field: To the east is another field where the best horses are kept. Also free to roam, there is significant difference between the quality of these horses and those of the northern field. While all horses are of fine quality, these are exquisite and contain qualities highly valued by any horse rider. Strong, large, and hardy, these horses are extremely prized and protected by excellent hunters, fed, groomed, an exercised to perfection. They are careful about selling any of these, and take great care to select the best of pairs for optimal breeding. Their favorite horses seem to be large specimens of the black and white horses with strange, sweet, ringing voices and the rare, solitary Arazura horse.

Feasting Hall: this cavernous, acre-long and two-story high building is a wooden feasting hall where hunters gather to eat, share stories, and revel in the thrill of the hunt. This is also where the Wavemaker lives, along with any hunters who wish for a more permanent homestead or to shelter form the rain. A long table sits in the center of the hall, of which the Wavemaker sits at the head to overlook those whom he rules with a rather loose fist.

To be honest, most Kethlerins see no need to read or write, learning how to count in whatever way works for them and only then to keep track of their horses and hunting party. There are those who step outside of Kethlerin to educate themselves in other cities, and these “city-bred scholars” aren’t valued much when they return.

It is said Kethlerin used to be a true city before a mysterious traveler passed through and spread his contempt for magitech and advancements in living in general. Such was his charisma that the entire city followed him, eventually abolishing the entire city and taking up the ways of living as hunters and farmers. They have since rejected any external efforts to “improve their living” and seem to be doing quite well regardless. Proud, free, and well-respected Kethlerin is, while a city in name only, a society of the past and the primitive, has only grown in prominence