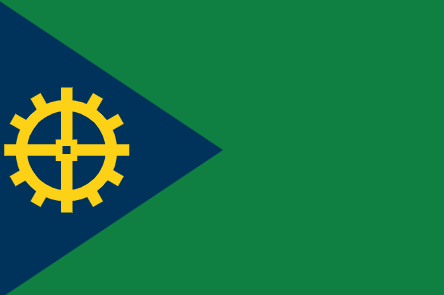 Stonehaven defies the Islander cliché on many levels.  Dubbed ‘nature island’ for a reason, the island lures the eco-friendly and the ambitious looking to make an impact within the Hyperion Empire. A beautiful marriage between nature and the future, Stonehaven is the jewel of the Empire as its center for research and development.

The concrete jungles that once dominated Stonehaven’s skyline are slowly giving way to green skyscrapers, which look more like living gardens and thriving ecosystems than bustling hubs of research and development. Fervently working towards its dream of a Garden City, the island is ploughing finances into becoming more sustainable and greener. Outside the inland towns are plenty of walking trails, treetop jungle bridges, wildlife galore and the city's green jewel—the T.H.R.I.V.E. Botanic Gardens: these are the lungs that breathe life into Stonehaven.

Owing to its geographical location and maritime exposure, Stonehaven’s climate is characterized by uniform temperature and pressure, high humidity and abundant rainfall. Therefore, it is almost always warm and wet. Generally, there is much more rainfall on the western side of the island than on the eastern portion of Stonehaven, owing to a rain shadow effect. Thus, the eastern side of Stonehaven is much drier and slightly hotter than western Stonehaven. This can cause slight weather disparities from one side of the island to the other. This is significant to note because even a small hill can cause this phenomenon. Despite Stonehaven’s size, there may be sunshine on one side while there is rain on the other.

Stonehaven has been described as a tropical Elysium, peppered with glassy lakes, beaches unmarred by tourism, jewel-colored orchids, and lush greenery abound. Stonehaven’s steamy Nature Reserve is a 163-hectare tract of primary rainforest clinging to the island’s highest peak. The reserve is said to hold more tree species than the entire Genesarian continent, and its unbroken forest canopy shelters the recovering Stonehaven’s native wildlife, including long-tailed macaques, pythons and dozens of bird species. The visitor’s center showcases the area's flora and fauna, including two Midland tigers who once roamed along with the jungles of Genesaris proper.

Stonehaven is a combination of Eastern and Western Genesarian cultures. Influenced by the Queen’s desire to further unite her people’s original five Imperial lines to spur the Empire into a more peaceful, flourishing life, Stonehaven’s meritocratic ideologies ensure the best and the brightest oversee the head of research and development, fostering a diverse population. Ideals of peace, progress, justice, and equality are deeply enshrined in Stonehaven beliefs.

Stonehaven has a highly developed market economy, based historically on extended entrepot trade. Considered innovated, competitive and business-friendly, Stonehaven’s economy has flourished under Raveena’s sovereignty. The Hyperian Empire’s Artificial Meridian Technology company was the first business to launch Raveena’s dream into a reality and has since stayed abreast as the major research and development company responsible for pushing the Hyperian Empire into the Genesarian magitech age and further. Several types of currency flow from every part of the world, from Genesaris to Renovatio, all of which can be converted to the local coin.

Sibis Medicinal and Magitech: A modern-day apothecary and dispensary with balms for the body and food for the soul. Sibis functions as a biotechnical wonder that supplies herbal essences, as well as cosmetics, and a delicious cafe menu and repairs to current magitech devices.

T.H.R.I.V.E. Corporation: After the establishment of the Veluriyam Empire, Thraece of Ursa Madeum was in dire need of arable land and healthy water to rebuild business and establish consulate ties between Terrenus and Genesaris proper. As an active political party, the Senarian Empire spearheaded a conservation initiative alongside the Thean Consulate to help restore the land and protect and preserve it's ecological integrity both locally and abroad, as well as provide an institute for studying, collecting, and breeding new flora and fauna across Valucre.

Having relocated its headquarters to be hosted in Stonehaven on behalf of Port Thea, T.H.R.I.V.E. became known as the Thean Headquarters for Rehabilitation and Innovation of Vital Ecology. It's Thean consulate remains situated in the island of Thraece to assist in diplomatic relations between the Terran and Verluriyam Empires.

A.M. Technologies: Funded from the nest egg of capital inherited by Raveena from the DeSeer Family, Raveena founded a research and development company to assist Predator’s Keep in the Dasua War. The company was officially named for its first successful prototype—Artificial Meridian Technology—designed to combat the chi-wielding monks of the war. It has since been the focal point of technological advancement within the Hyperian Empire, and a large reason for the Queen’s purchase of the island.

Little Laconia: Keeping Matreyan roots in mind for its local citizens, Little Laconia is a slice of the Hyperion Market brought to Stonehaven; capitalizing on East meets West cultures, spice traders and merchants coming for coveted herbs and spices spill their wares across its five-foot ways and Genesar laborers swarm into the area each weekend looking for work. Little Laconia is a lively, eclectic mix of Matreyan and Genesar markets, eateries, taverns and boutiques.

The Council of Seven

Like all lands within the Rising West, the island-city of Stonehaven is subject to the edicts of its capital city Aelindra. While the city rulers can police their domains with leniency--more in line with their own beliefs and views--they are all bound to the will of the council, seeing their will done and that no transgressions be made against their edict.

The Stonehaven Order of the Aralim: The Order of the Aralim serve as Knights of the Hyperian Empire. The Aralim serves as the militant strength and stability of the Imperial Sefirot. The backbone of the Order; These are hardened fighters, agents and diplomats are pillars of the Order's values, noblemen and women who have dedicated their lives to the preservation of the Empire.

The Stonehaven Branch of the Hyperian Order Guard: Soldiers of the Order, these are contract soldiers hired on, manning and protecting the Empire's outposts and interests.

The Devonshire Institute of Magitech: A core foundation to Stonehaven’s humanitarian endeavors locally and abroad. An academy that allows mages to study biotechnological applications in magitech, sorting its students to match their skills and passions to various applied branches that prepares them for the active field. Named after the home of the DeSeers, Devonshire’s color-robes help identify a mage in the field and are particularly known for being active T.H.R.I.V.E. operatives. Their color-robes are sorted as follows:

Blue Mages: Focus on rehabilitating and studying sea resources. These Magi are integral to understanding the harmony of science and magic within the ocean and along the shores.

Red Mages:  Specialize in medicinal and medical ventures as well as health preservation. This branch of the academy is well known for researching magical-influenced diseases as well as traditional ones, medicines and regenerative organ restoration.

White Mages: Focus on the balance of magictech and are more commonly referred to as alchemists, as they use their knowledge of herbal medicine and magic to create useful chemicals--and can specialize further in using their crafts to counter or neutralize harmful pollutants and magical effects.

Yellow Mages: Inspired by studying the Knight Family’s Chimera gene. Yellow mages study the gene splicing of other plants, insects and animals and its uses to the masses, the characterization and utilization of magic fused with those genes for research, and their applications in agriculture as well as medicine.

Gray Mages: Dedicated to environmental study and protection, they focus on the maintenance of biodiversity and the removal of pollutants in a natural state to restore a biome to its full potential.

Brown Mages: Specialize in management of more arid regions, and those that lack arable land. They also specialize in researching and developing techniques and applies magic to help manage resources to handle extreme environmental conditions.

Violet Mages: The least directly involved in the field yet perhaps the most important of all the Magi, violet mages study and apply ethical and philosophical issues around biotechnology and its ties to magitechnology.

Cable Cars: With the invention of the steam turret and pump, the city’s means of transportation increased, namely the use of steam to provide energy to facilitate transportation along the coast from the mountains. This technology is rare and new to Genesaris and has met with some level of prejudice and resistance, though the city intends to overcome this obstacle to introduce more environmentally friendly means of transportation beyond magitech.

Roads and Walkways: The city is lined with roads and sidewalks that are popular for walking. Bicycles, spellcycles and spellcabs are often seen on the roads, while there’s plenty of room for pedestrian movement.

Cabs: Transportation in Stonehaven is eco-friendly. The most common method is by foot, with pulled cabbies being a close second. Spellcycles and spellcabs have been introduced with great success to eliminate most of the pollution in the city.

Private: Personal mounts such as Thestrals, Horses, Dire Beasts, and Wyverns are scattered among the population. Upper-Class citizens that can afford larger, personal ships house them in private marinas, while others have access to their own personal airship.

SpectreBeanz, Csl, Garion and 7 others reacted to this
Sign in to follow this
Followers 1
Go to articles