"May lightning rage in your heart and soul." 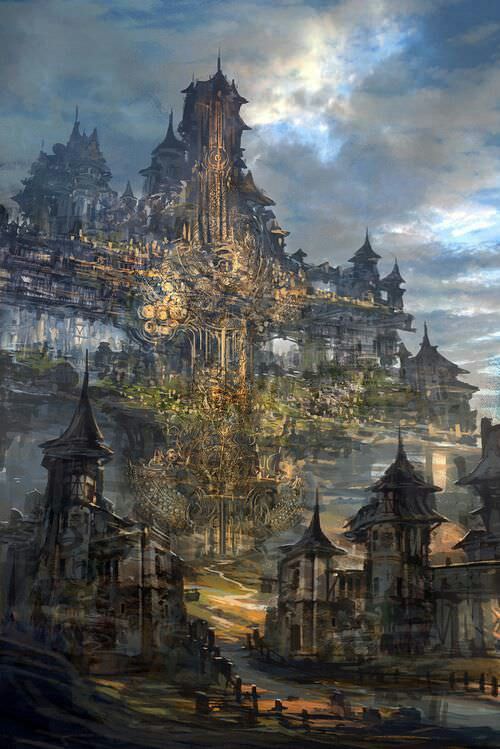 Stormward, Sanctuary of the Storm God

For some reason, Stormward never goes long without being struck hard by a Magestorm. The entire city has warped to reflect this magical phenomenon; the buildings and proud towers glow an eerie, electric blue, and the skies are often clouded over yet gleam a bright silver, emitting great bolts of lightning frequently. The outsider might consider the city too dangerous to live in due to the lightning storms, but not the Stormwards. They regard themselves as favored by the great Storm God Zare and all the lesser deities. Although they are accepting of other religions, they are said to be less tolerant than all the other cities. While other cities have various temples and adhere to the beliefs of others, those of Stormward have only one temple; the temple of Lord Zare.

All citizens of Stormward are required to be practitioners of the magic of electricity and lightning, even those who have little skill in magic. These latter often devote themselves to learning the science of magic anyway, studying how it works and the possibilities it provides in the realm of magitech, which is largely prevalent throughout the city.

Flag: An electric yellow phoenix, made of lightning, against gray stormclouds on a black flag.

Due to everyone being required to study magic, the city has produced some of the finest mages in storm magic and the science of in the land. Dangerous and fearless, they are also noble, austere, and hold a great sense of honor, aspects they consider valuable and advocated by the god Zare. Even so, they seem to enjoy fighting, and can often be seen in the streets sparring with each other at a distance. Their magic is such that even shields made to repel lightning can break. Their only true weakness is weapon combat; while they can still shock their enemies, they have neglected handheld blades.

Zare was said to be human once, turned into a god at the end of his life. This marble statue, erected at the center of the city, is a brilliantly carved statue and the tallest structure in the city, taller even than the towers scattered about the roads. It features a young man, hands clenched in prayer and face in pain, ind mid-transformation to a phoenix made of lightning, proud and fierce, wings spread and taking flight. Though without color, the statue seems alive, and has never been damaged by the lightning that strikes it so often.

Due to quite a number of deaths in hopes of blessings, people are encouraged not to get too close.

The Temple of the Storm God

The only temple offered to anyone, this is the widest and longest structure in the city and is never without people. The ruling priest, Nikolai Stormson, lives his life here, preaching the Storm God’s religion, offering blessings, forgiving sins, and generally offering his entire life to the god. The temple often shakes with the resounding thunder outside, but none of this stops the murmur of prayer drifting through the building.

The temple is a marvelous building with stained glass and paintings of Zare, with scriptures detailing the life and transformation of the man who became the god. Treasures and artifacts dealing with Zare decorate every wall and even the ceiling. Stealing any of these is considered paramount to murder and is punishable by death.