"We are not animals but people. We have gifts no one else has, yet we are human nonetheless. We will use our powers to benefit mankind." 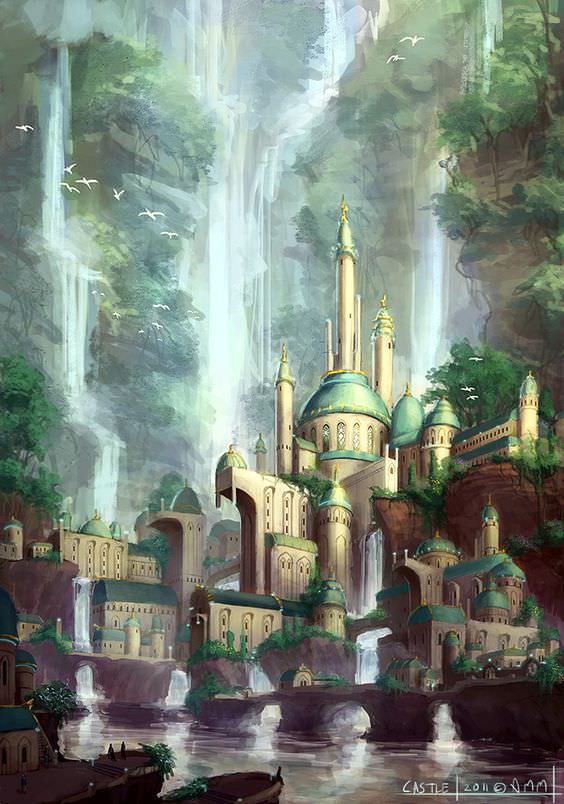 Sunset Way: Land of the Rare

At first glance, Sunset Way is an elegant, beautiful town of graceful sculptures and sparkling fountains situated all across the smoothly paved streets. Modest but comfortable inns and taverns featuring national artwork decorate the town with temple-like buildings used as housings. The only obvious feature is the dawn and dusk, where the sun and earth seems to merge in oscillating gradients of gold and red hues.

In actuality. Sunset Way is home to the strangest magic in Genesaris. Mageside City trains mages in the elemental arts and magic circle, but Sunset Way’s pride is its community of Seers, Va’Elar, Sensers, and rarer forms of magic requiring special training and protection from those who wish only to exploit their invaluable skills. A strong belief about fate and destiny for these people are upheld, worshipping Ratharo, the God of Prophecy and guarding with a fierce devotion the legendary Cavern of Blades.

Flag: A blue eye surrounded in white flame, against a lighter blue flag.

The lord of Sunset Way is a powerful seer of the Lajai’Elas breed. Most call him Lajailas, a play on this word. He has studied the rare magic through his entire life and oversaw the gradual transition of Sunset Way into the sanctuary for rare magic it is now. It is said he knows more of magic than any other in the world, rivaling even the greatest archmages in power and knowledge.

Sunset Way has petitioned for neutrality in war. The appeal was denied by the Southern authorities but amended to state that Sunset Way’s forces shall not be called upon until no other option is available, stating that the rarity of its unique magic population among the rest of Genesaris should be protected at all costs. Some take offense to this, saying the government treats them like endangered animals.

The solitary military, taking its name from the God of Prophecy, is theoretically a dangerous enemy to have. Its variety of magic and power unseen anywhere else renders normal defenses inert, and the amount of seers who can see their enemy’s next move renders strategy nearly useless.

Existing for generations, the Cavern of Blades is a legendary cave storing the weapons of equally legendary heroes and fulfillers of prophecy. Scrolls and tablets describing the history and use of the stranger weapons are scattered on the walls and kiosks, and very rarely are outsiders allowed to enter. Occasionally a weapon may be given to one who is believed to have a great destiny to fulfill.

School of the Rising Sun

The single best college on magic for experiences mages, seers, and other rare magic users. The school is small, with a relatively low acceptance rate, low teacher to student ratio, and high tuition, making it a highly revered place of learning.The entrance is marked by a flight of steps leading to a dais supported by great pillars, placing an imposing first impression on newcomers.

The Fountain of Seeing

The only one of its kind, the Fountain of Seeing is a destination for those and their guardians who have magic they cannot identify. A magnificent circular fountain of twenty feet and a wyvern rising twenty-five into the air, spewing magically-altered and enchanted water from its mouth and wings, when the subject looks into the water, the water identifies the basis of the magic and changes color according to the magic the user has. Click here for a full list of known magic users.

White: Karmatic Forces (These are usually escorted from the premises fairly quickly)

Multicolored: water that contains two colors or more denotes breeds who are more than one type, with the colors above specifying which.

Rainbow: Unknown. This hasn't been seen for years. Those who get this reaction get have a special meeting with Lord Lajailas and are likely to recieve quite a bit of fame as well.

Sunset Way is located on the border of the Cold South and the Midlands, and therefore receives marginally warmer weather than it's Capital, Shrine City, but it is still considered chilly by Genesar standards. The summers are mild. In the winter it is cold enough to begin freezing the lake and river it is nestled beside, however it is rarely cold enough to freeze solid.

Typical fauna include wolves, foxes, and hares. Due to their proximity to the lake they also have a population of ducks, swans, and otters, as well as many varieties of fish. It is not uncommon for a fisherman to pull in an odd catch, and many say that the magic in and around Sunset Way has effected the water, citing the Fountain of Seeing as an example of this. Whether or not it is true, it's clear that the Lake still has mysteries that even the prophetic mages of Ratharo have not seen, encouraging myth and legend or a great beast inhabiting its waters.

While technically Sunset Way's borders are open to anyone it is much more welcoming to thus who study or practice magic. As such elves, fairies, human mages, and other races prone to magic are much more common than their more practical counterparts such as dwarves or orcs.

Like many things in Sunset Way, it's economy depends largely on magic. Often it's blacksmiths are known for forging magical blades that cannot be found elsewhere. Jewelry sold in the city is known to have unheard of effects on its wearer, the food is said to be more replenishing, and one can buy scrolls teaching new spells. Most importantly, however, many make pilgrimages to Sunset Way to learn their fate. There are many buildings solely devoted to prophecy, of which a querent can take their pick: tea-reading, tarot, palmistry, or many of the other newfound methods being researched and discovered.

Furthermore, Sunset Way often has political power with other cities by predicting catastrophes before they happen and use this as a bargaining chip to get supplies they need.

Sunset Way collects valuable art from all over Genesaris, specifically paintings. (although sculpture and poetry is also revered) Some claim that one with the right eye can see through the very strokes on canvas and learn about the painter, or even learn knowledge the painter knows by proxy. It is a subject of skepticism but also fascination. Some tout the ability to look at a painting and from it tell the future. Others simply admire from afar, for these paintings are not kept to the secrecy of homes but instead shared with the general public. After all, the future is in the eye of the beholder.

Sunset Way once attempted to start a sport of Magefights, but it quickly died because too many people could tell how it would end.

Portals are widely used throughout Sunset Way. Unlike other cities their portals are not heavily guarded. Only a couple of seers guard the entrance. If they foretell any dark threat approaching, the gate is closed. This makes for a simple way for people to travel about freely within the town. However the city's lax policy to entry is not without repercussions; the seers cannot see everything. Therefore illicit materials or dark magic has been known to pass through their gates.

Sunset Way has recently adapted it's laws from it's capital, Shrine City, with special clauses for magic use and stricter laws if magic is used improperly.