By The Hummingbird (edited) 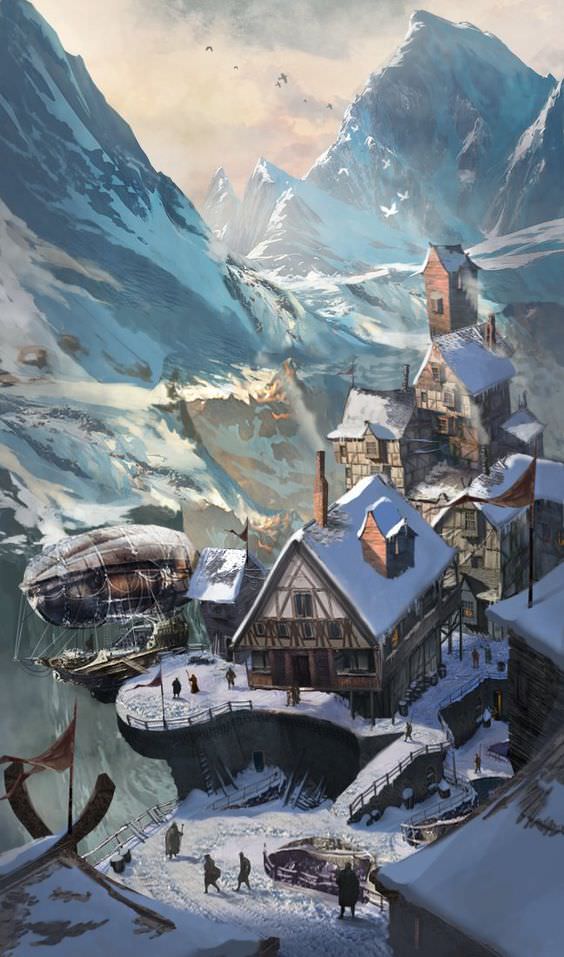 Flag: A white wolf pierced dead with five black spears against a forest, against a gray flag.

Long ago, when Valjer City was just a cold little hamlet, men and women gathered together in the biggest farmhouse they could build and cast a simple vote: To stay and brave the vicious winters or to retreat back north. The debate took most of the night. Many of the younger folk were adamant that the next winter would be the end of them, and for good reason. Others said that Valjer, the Dragon God of Survival for whom the tiny community was named after, would scorn them if they fled. As if the colds weren't enough, packs of diabolically intelligent white wolves made Valjer City their favorite hunting grounds, and townsfolk were losing children and elderly at an alarming rate. In the end, Bailey Valmer, the settlement's founder, proposed a compromise. With them he created the Deepdelve Pact, and the entire community began to dig.

It has been almost a generation since Valjer City rose to the surface again, with nearly a century's worth of sons and daughters well-armed and well trained to fight back against the harsh winter that had driven them underground for so many years. They've risen with a vengeance. In the first months the strongest men stormed out into the wilderness and began to slaughter the winter wolves, putting a dent in their population enough to pay them back for the deaths of their forefathers with significant interest. When they found horses, they then dragged herds back to act as their steeds, and soon enough they were one of the finest troupes of rangers as could be found on the continent. What the men lack in tradition they make up for in effort, and their victories have done leaps and bounds for the community they protect and feed.

Bailey Valmer the Fourth sought to make his city a center for export, but he was recently murdered by a woman known only as Aelyria. Now, Valerie Valmer has taken control, and with her own agenda in mind, Valjer grows in prosperity.

Settled in the harsh environment of the Cold South, Valjer City is surrounded by snow and ice. The many trees that make up the wood it overlaps into are always adorned with gowns of fresh snow, the leaves often encased in ice. Valjer City is the primary producer of ice used for water and other desired cooling effects. White hills and dunes are found in plenty with mines where precious stones are harvested in the cold, eternal winter of the South.

As the Grand Capital of Genesaris, Union City opens its gates to all the other cities and capitals of their respective lands. Roads lead to and fro from the city, allowing easy entrance beyond the great walls that surround the capital. Although unprotected by any large mountains or rough landscape, Union City stands fearless with its massive army and the promised alliance of all the Genesar cities’ armies combined.

An old and ancient city, Valjer is still growing. It is small, but under new leadership it is quickly shifting into a true city worthy of being named after the great Dragon God. Currently, most buildings, arranged close together for safety, are homes for the hardy civilians. There are few taverns and inns, but they do exist, located near the center of the town where many congregate to socialize. Bowls of fire are situated near every roadside, where the poorer of civilians may cook and warm themselves.

Buildings are all made of wood and stone, cold to the touch and secured with iron nails. Designs in Valjer scorn luxury, favoring practicality and simplicity. Instead of carvings and art made by human hands, history is honored by the very way the citizens live – primitive to some, honorable and courageous to others, and still foolhardy to more.

In the taverns, kept warm through magic and fires aplenty, there are roughly made warnings of white wolves and other dangers known throughout the wilderness, keeping the civilians aware of the current dangers of traveling the nearby forests. Notices and signs are plastered with these warnings, begging for help from strong and brave warriors for safe escort through the forests to warmer towns, or asking for help exacting vengeance against the wild things that have stolen resources and lives.

The heart of Genesaris exerpiences all kinds of temperatures, from wildly hot summers to freezing cold in the summers and winters, respectively. Generally, nothing extreme has been seen in Union City beyond the unusual Heat Flash, with the most violent Magestorms usually passing it by or efficiently blocked by magically-forged shields wrought by the finest of sorcerers. Springs are warm and sometimes wet, with fall being pleasantly cool, though as the year grows later the temperature drops, often bringing pristine white snow to blanket the streets.

Some call the Cold South a wasteland of ice and snow, but there is a certain beauty to the often pristine whiteness of the land. Icicles hang like elegant crystals from trees, and snow often falls from a silver sky. Arctic foxes and white bears roam the forests thick with wood and plants adapted to the cold, foraging for food, and there are the occasional coldwater fish, white rabbits and strange, mythical beast sometimes sited by the wandering man or woman. The most commonly seen – and feared – is the white wolf, an intelligent species of wolves who hunt humans with fervor.

Warm of any kind is rare in Valjer, but there are a few hot springs found and housed in buildings selling their warmth to anyone willing to pay. This is where uncommon vegetation is found,even that of fruit trees, kept alive by the heat and magic of those who can cast spells supportive of life.

Not many tourists visit Valjer City, making the popolations strictly of those who live their lives in Valjer with discrepancies made by working mercenaries and warriors looking for a dangerous job. Although travelers are usually greeted with proper manners and even eager ears wanting to hear news from beyond Valjer’s borders, suspicions and skepticism over travelers’ sincerity has grown, due to no small part in recent disturbances and new rulership.

Valjer is self-supportive, surviving on trade and gold alike. They transport hewn ice to other lands, as well as stones mined from the hills. Most civilians make their living off of magic, farming, building, and guarding the city against threats. The small schools have seen a leap in growth and quality education, though it is criticized for its lack of programs related to art and humanities. There is no actual treasury of Valjer City, but it is said that Valerie Valmer keeps a stash of emergency resources… just in case.

The best tavern situated in the center of the city is a sprawling multi-storied building known as the Ice Dragon. Here, drinks and food are served to anyone willing to pay, usually foods imported from warmer lands or game hunted in the forests with varying success. The drinks are praised, however, for strength and variety; its beer is a common favorite and the ales are strong. The taverns are often packed with civilians and visitors alike, and rooms are available for rent.

Some social gatherings are held near bowls of fire situated near roadsides and trodden streets. This is usually a pastime for those who simply wish to hold a meeting with friends, or some who like to use the fires for cooking, or even simply to get out of the house.

This is the first and largest farmhouse ever built, in which the Deepdelve Pact was proposed and forTo this day it still stands strong and sturdy, having braved the harsh winds of the cruelest winters and attacks by ravenous wolves. Community meetings are still held here, and it is a place of respect and reverence, holding much history and, indeed, the survival of the city itself.

Near the Farmhouse lies a hole, covered and surrounded by stone and a wooden trapdoor. Years ago the Valjerian citizens dug far and deep, forming a community underground and living there until they grey strong enough to kill the wolves that had hounded and tormented them for so long. It has not been visited for a long time now, and most have forgotten how deep it has gone or what may lie there forgotten. Makred with a statue of Valjer the Dragon God, it remains as a sort of historical monument and remains in case it is ever needed again.

The so-called base is actually a small dock near the edge of the city overlooking a steep, if relatively shallow, cliff. No more than two or three small ships are docked at a time, but more may be seen circling overhead.

Regent: Valerie Valmer. With the death of Bailey Valmer, she rules with a strong hand and a firm guidance. Some doubt her legitimacy as ruler, but none doubt that she has only the best in mind for Valjer City.

There are two schools in Valjer, one for children and one for adolescences and adults. Thse schools teach mathematics, reading, writing, and counting. While does teach the necessary basics of common, everyday living, it has been said they only teach the rudimentary skills and only those necessary for making a living in Valjer City itself, at that. All children beneath the age of fourteen are required to go to school, however, with the choice given for older civilians.

Roads and paths: there are roads and rough dirt paths for walking and horses.

Wolfbane and Deepdelve Rangers: The vengeful people who first slew many of the wolves have only gotten stronger with time, and are not a wise choice to fight or provoke. They continue to patrol the city and its outskirts, slaying any and all threats. Whether on foot or mounted on horses, they are tough, courageous, and ruthless.

Valjer City has been and will be for many years. No one knows exactly when it was built, only that it has existed through wars and famine and harsh environments for a longer time than anyone cares to admit. It is said a small group built a comfortable living selling the fur coats of the beasts, usually the white skins of wolves, and eventually built the age-old tavern, around which the rest of the city sprouted. Others say Valjer was once grander than it is today, and the ruins of a city torn by war lie beneath the buildings that sit there now.