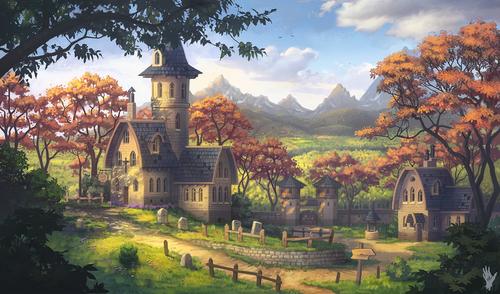 This seemingly peaceful town of windmills and farming communities emanates a surprisingly stressful, anxious feeling. Perhaps it’s the barbed-wire fence that encircles the entire town, the shambled remains of houses burned to the ground, or the ragged state of ill-kept animals. Or perhaps it is the townspeople themselves with their leering, unwelcoming stares.

Wicker Town used to be a prison, a sort of concentration camp using criminals for farmwork to provide food as community service for the government. It has since been reformed as a rehabilitation center, but the majority of criminal residents have never gotten much better. Suspected of sly bootlegging of illegal items and dealing in the slave trade, this is a town with extreme amounts of crime, thievery, and murder. Wicker Town has horrible relations with the neighbor Aelindra City Capital, which seeks to better things, yet crafty and shady politicians bribed with riches keep things still and cold.

The barbed-wire fence is there for a reason; no one is allowed to leave and few are allowed to enter.

Flag: A brown windmill against a white flag.

There is no official ruler, only gang leaders and crime lords the other citizens fear and seek to stay on the pleasant side of.

Wicker Town has no military, but as nearly all the citizens were criminals of some sort, most have experience in thievery, murder, assassination, spying, betrayal, and/or arson. Occasionally, one or two are hired out, to be freed and their criminal record expunged on the condition that they complete a task “suitable for their skills”.

Seated at the western edge of town and surrounded by its very own barbed wire, this is not a great place to be. Also sarcastically named the Happy Place, this was once a dreary, soundproofed isolation room where particularly unruly criminals were placed until they calmed. Unfortunately, they were usually forgotten about and were driven mad if they didn’t starve or dehydrate first. Today, the Isolation Cabin is used for exactly the same thing, only the ones placed in there can be anyone someone doesn’t like. Sometimes two or more are shoved in to fight to the death, providing betting and gambling among those outside.

“You Get The Booby Prize.”

Occasionally someone does something bad, much to the displeasure of a crime lord, for which they are given the “booby prize”, located at the north edge of town. This is actually a large collection of barbed wire and chains, stained with blood and rotted remains of animals and humans. Their prize for their bad behavior or even just saying a bad thing about the wrong person can get them tied up here and left for days, mocked and ridiculed and often left to bleed out to death.