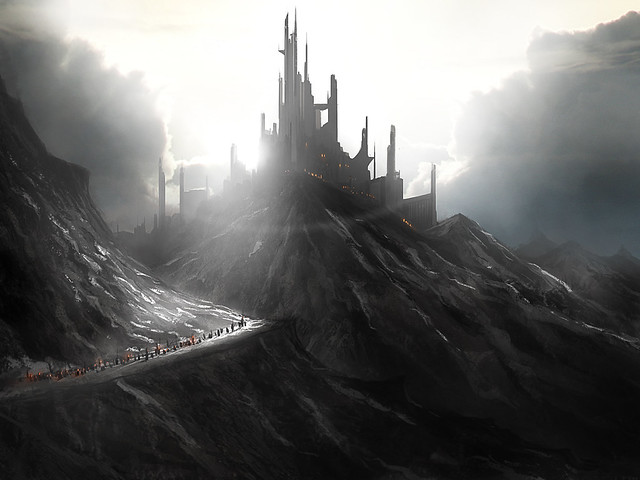 Coming from an easterly approach, a man or woman crossing the Day River will find themselves entering the land and holdings of Roen from his Black City of Patia. Depending on the season and proximity to the city itself, the path can be an inviting trail through woodlands and prairies, a sodden path of mud and marsh, or a hard, frigid wonderland of freezing rain and terrible snow. Mounted men in plate patrol this road in pairs of four, and the occasional holdfast, minor encampments with no more than two dozen men, can be seen in overlook. To the West lies a nameless mountain range in which the Black City resides, and to the East, like a finger jabbing into the sky, is Blaurg Mountain.

Coming from a south-western approach, a man or woman crossing the road from Marlboro Keep to the nameless mountains in the North find themselves treading the land and holdings of Roen, the Crimson King of the Black City. Rich farmlands and occasional apple groves provide the Black City and neighboring villages and holdfasts with foodstuffs. Here men and women in plate patrol the roads and lands in force, carrying messages and other paraphernalia, both civilian and military between Marlboro Keep to the South and Patia to the North. Watchtowers in scarcity line the road, while a minor keep at the mountain pass provides an intermediary military presence between the Black City and Marlboro Keep. It guards the mountain pass.

The mountain pass leading through to the Black City is a lengthy journey, though not without it's sights. Rich with ore, these nameless mountains for hundreds of kilometers are home to small villages of miners that excavate gold, silver, platinum, and other precious metals from the bosom of Terrenus itself. For a fraction of their profits, the Black City offers protection and other services to these small communities, and thus both prosper. Through this path a traveler might find excuse to stray in hopes of digging for himself a small fortune, though this is ill-advised. More appropriate would be for them to find local lodgings, for they have yet to reach the pinnacle of their travels.

Coming out of the mountain pass, all eyes will inevitably gravitate to the tower that dominates the skyline of an immense black city. The weary traveler has reached Patia.

The Lore-Spire, the pinnacle of Terran engineering. Rising from the center of the city like a dread-black sword piercing the heavens, it is here the Outsider himself observes the city and her lands, and waits for only the Gods know what. The Black City's architecture can be primarily classified as Gothic-inspired, with more modern aesthetics and functionality cropping up the further one travels from the center; a sure sign of progress. Civil engineering is a co-opt between residential Gaianists, foreign wizards and engineers of practicality that blend sorcery, earth-shifting and science to produce unique pluming, ingenious sewage-systems, and sprawling living conditions otherwise unheard of on Terrenus. Most buildings have Gaian-grafted obsidian over their surfaces, giving the city its reputation.

Patia's climate is influenced most by the ocean to the West. As a result, it doesn’t have the extreme temperatures that other locations at similar latitude would have during the majority of the year. The average temperature is a mild 50°F. A major warm ocean current keeps sea temperatures mild, too. Hills and mountains, mainly around the coast, shelter the city from strong winds coming off the ocean.Unfortunately, Northern winds during the winter months find the Black City almost inhospitable. Freezing rain and snowdrifts make the South-Western mountain pass near-unapproachable.

Patia shares a great deal of flora and fauna with Terrenus.. The below are just a few of the notable exceptions.

Wyverns (Animal): Mostly located in the South-West mountain pass, these sub-dragons are solitary creatures that seldom emerge from their haunts. Cave-dwelling, they can be usually found in alcoves and lode-mines, coveting particularly profitable mineral veins. Every so often inhabitants from mining communities encounter a nest of wyverns in their excavations. Standing Patian military forces are usually dispatched to clear these nests. Wyvern bodies are prized for their bones and hides in the Black City. Older wyverns breathe fire like their larger cousins, and can grow as large as 9ft in height.

Grotesquerie (Abomination): Strange aberrations that haunt the northern landscapes of Patia, these spidery-limbed humanoids are the direct consequences of sorcery gone awry within the citadel of the Black City. Ravenous and terrifying, these Grotesqueries roam the lands ranging from Marlboro Keep to the Day River in small, infrequent bands, descending on unwary travelings to maim and devour. For every soul lost to their predations, the Grotesqueries add a number to their ranks. These monsters are unnatural, and are to be killed on sight. Their bodies must be burned to keep them from reanimating.

Despite growing economic progress and relative peace, the Black City of Patia is nonetheless an occupied city-state with clashing cultures. Gaian philosophy sometimes clashes with Seer principles in converts, which produces a source of contention and division among the population. A hard, unyielding sense of honor and moral discipline from those who follow the Outsider and his patron deity clash with the patient understanding and logic of Odin Haze, for example. In spite of these differences however, there remains among all a tolerance and affection for one's fellow man, and the two opposing cultures can and will unite to produce an amalgamation of arts, education and social equivalency. The Black City of Patia is the sole location of a infantile culture diffusion between two opposing ideologies.

The population is diverse in thought and philosophy.

Post-occupation, Patia suffered a sharp economic decline were it not for an armistice and heavy-handed cohesion between the Outsider's military administration and the remains of the local government. Patia's economy has seen a steady incline since occupation within recent years, with the potential to achieve it's former glory. With precious metals and jewels being mined from the mountains and borders opened for trading, Patia has seen an influx of traffic and coinage that has started to make the Black City a producer of fine jewelry and fittings, it's major exports. With cultural amalgamation and a unison of minds, coupled with various partnerships with others outside the grace of Odin Haze, the Black City is tentatively pushing into Terrenus and the world beyond differing scientific constructs (like mag-locks), magical artifacts (like the patented scry-globe), and more. There are currently no embargoes on Patian exports to stunt this economic growth.

Interesting enough, the Black City is also renowned for its Jaeger liquor. It's known among the locals as a 'drinkable incendiary'.

Patia's monarch is the Outsider himself, Roen.

Patia has 20,000 church-soldiers acting as the local police force. Church-Soldiers deal with crimes ranging from petty larcenies to murders, and have jailhouses and court systems located throughout the city. Patian church-soldiers specialize in utilizing practical methods of investigation and Law & Order, and are made up of ex-wizards, pisons, Seer-clergy and Earthbenders.

In lieu of a PeaceKeeper, the Black City's department of Advocacy handles what dire situations might arise within the city and in her lands. At current there are only three members opperating within the Advocacy, and their names are stricken from records. They are always looking for exceptional members of society and power to add to their sacred ranks.

Within this culturally massive community is a diverse system of education located in trade schools, guildhalls, and even the military institutions and Lore-Spire. In lieu of a primary focus, the Black City offers and encourages a broad understanding of the world and multiverse with well-rounded educations, with many opportunities to study particular subjects including but not limited to: metaphysics, sorcery, arcana, geomancy, law, economy, warfare, and religion.

The Outsider: Dread Margrave of the Bloody Seer and Crimson King of the Black City of Patia, Roen lives in the citadel and Lore-Spire within the center of the city when he is not abroad with his paramour and betrothed, The Black Queen of Orisia.

Rin, Off Topic and Marquis Zantara reacted to this
Sign in to follow this
Followers 2
Go to articles