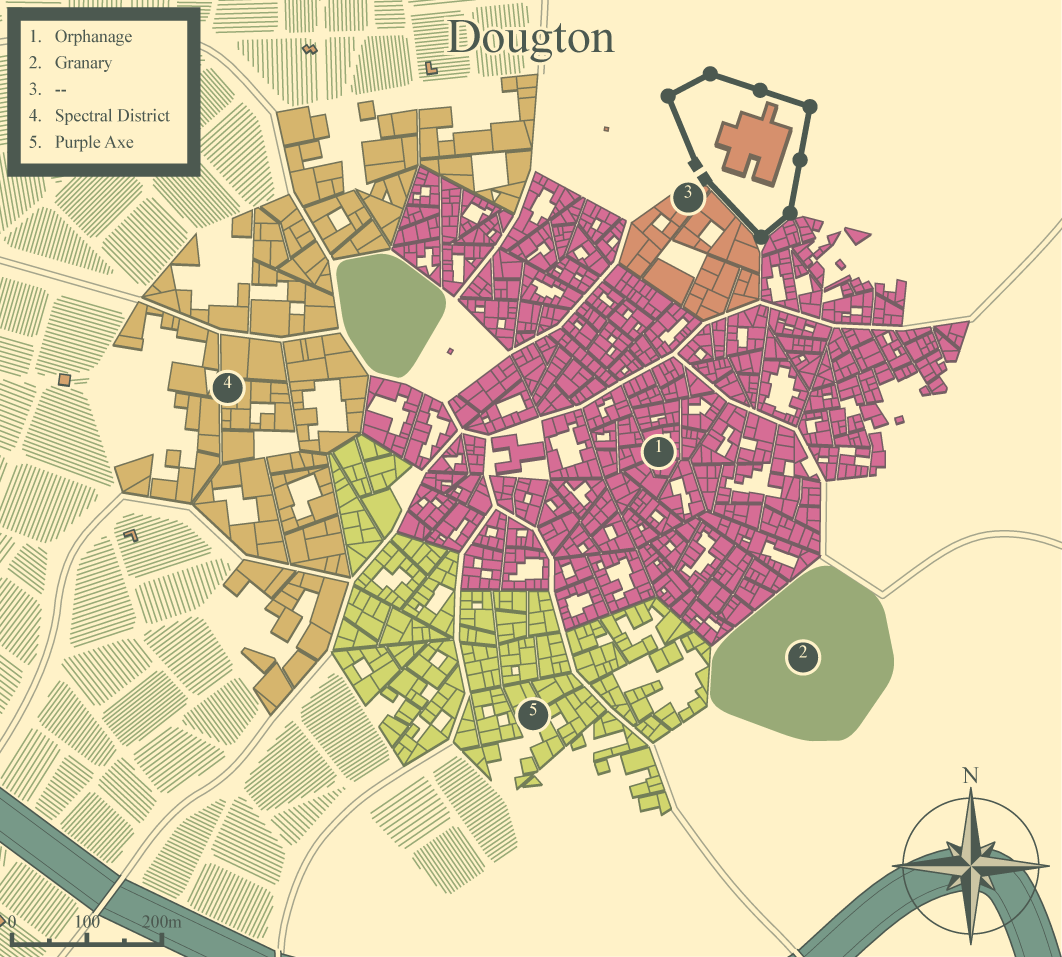 Dougton was constructed inside of a valley and its borders were expanded until the valley was filled with city infrastructure. Each year the surrounding high rise area is flattened by skilled geomancers to allow for further expansion, either of infrastructure or of farming grounds. This section of land was chosen for its perennially temperate climate and the wealth of potable water piped into the area by the convergence of two legs of Coconino Creek.

The criminal organization now known as the Lords of Purgatory summon a phsyical deity in Dougton. After a small skirmish by a group in an attempt to interfere with the ritual, the LOP still succeed in their task and the avatar is now on the loose and in the wind.

The majority of the surrounding land has been dedicated to farming, rather than grazing or city infrastructure. Even residential gardens trend towards growing fruits, vegetables and herbs rather than plants with higher aesthetic value but less utility. Dougton, while not the single source of Terrenus's food supply, is a primary contributor to both volume and variety. As magic imitates nature, the converging of the two legs of Coconino Creek are symbolically paralleled by the convergence of two ley-lines, much to the benefit of the health of its occupants and the quality of their food production.

The scent of spiced meats and freshly baked goods is immediate and distcint. Dougtonites love to cook and love to eat, approaching the growth, production, distribution, and preparation of food with nearly religious fervor. Dougton is not without a homeless population but the mendicants of this gourmand city are well fed.

Dougton's architecture leans towards simple house made of simple materials, reinforced with the exotic only when it lends to utility and durability; Dougtonites are a practical people. One is struck with the impression of a rural community made up of simple structures that do not look as if they could withstand hurricanes and floods, but do.

Dougton police are among the most celebrated swordsmen and women in the nation. Their sword style and close-quarters combat technique grew up organically in an area that knew technology and magic only in rare instances, and so emphasizes environmental awareness, the geometry of body and weapon placement, and psychometabolism to increase strength and speed.

Dougtonites take on an almost luddite philosophy, favoring manual processes to those automated by magic or technology. They believe it not only makes for better character but that heavy reliance on technology makes a person less skilled in practical matters and, hence, less useful. Dougtonites are trend higher in superstitious belief compared to other cities in Terrenus but are selective in their application, most practicing customs said to grant luck or bestow favor, but paying little mind to those said to be ill omens.

Dougtonites are also extremely festive, celebrating every solstice and equinox in the year with a citywide festival and parade.

Dougtonites use recipes and cooked food as barter payment.

Dougton is a sleepy town, historically mundane and uneventful when compared to towns of more illustrious repute. But it has given birth to a number of local legends.

Jim Jenkins is the first person of honorable mention. He started off as the child of a textile merchant. When his father was robbed and they ended up in the streets, Jenkins joined a gang. He soon tired of a life of crime, scammed his way into a local school, and became a prosecutor. His intimate knowledge of criminal affairs gave him a decisive edge. His record, as impressive as it is immaculate, easily secured him a spot as a Judge in local affairs and when he ran for Mayor he ran virtually unopposed.

The second is Iris Hyacinth, the local PeaceKeeper. Her legend begins with Iris as the daughter of an herbalist, and a talented gardener herself. Despite her passion for plants, she soon hears the call of the war drums. It would seem as if she takes more after her father, Major Snapdragon Hyacinth, than she once thought. Iris turned out to be gifted in the arts of warfare and a natural sniper. She was selected for the PeaceKeeper Core training camp early on in her military career and was delighted to be find her hometown as her permanent assignment.

The third is from some centuries past, Jason of the Lions.