Overview of the Eridianus region.

Important notice: Eridianus' board leader is moving on to other projects. See this thread for details. 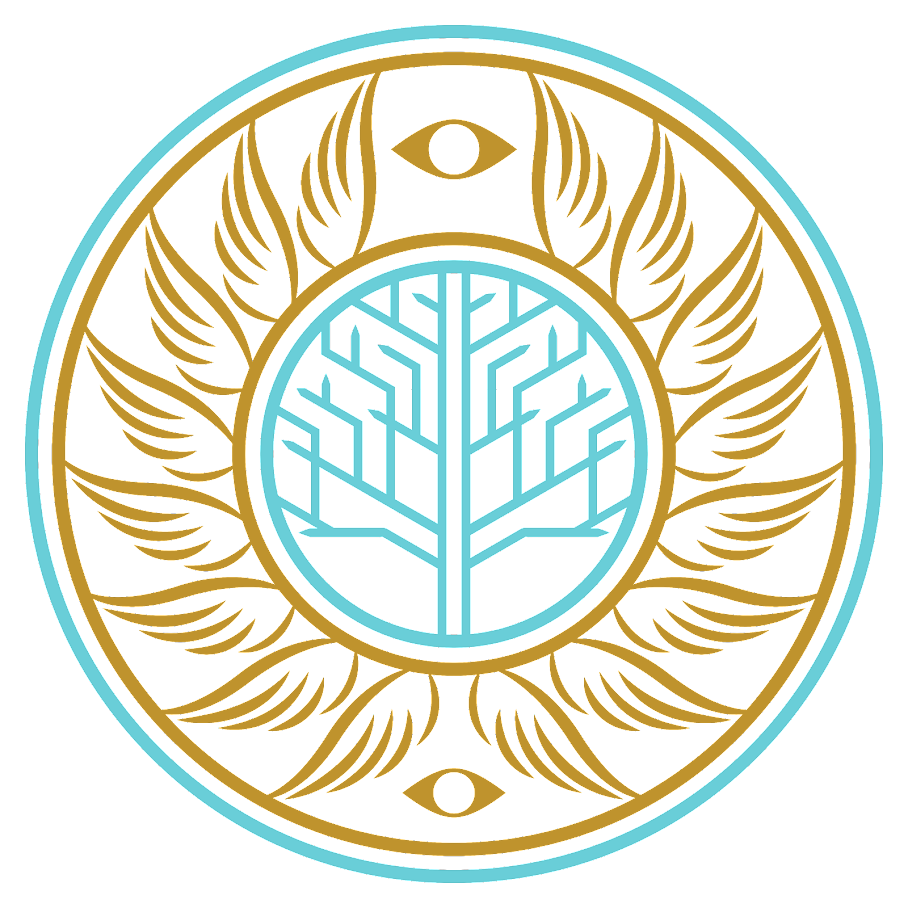 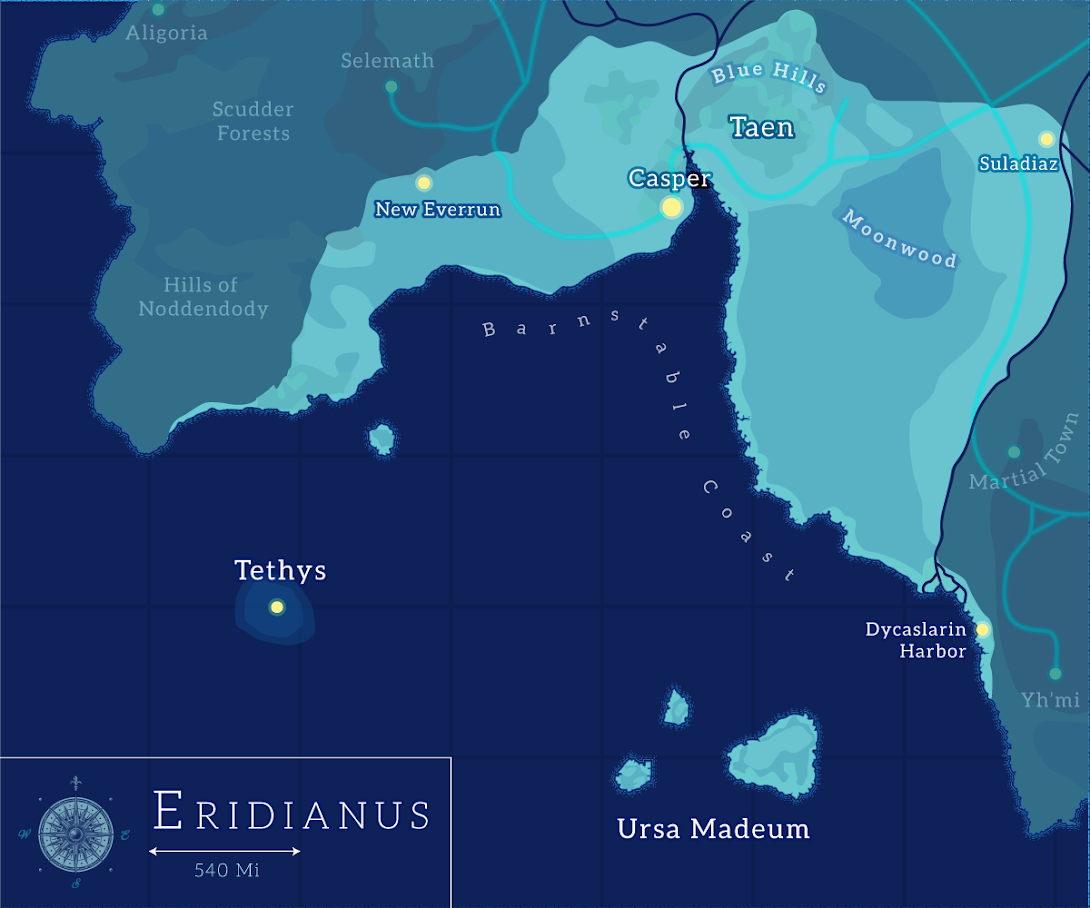 keep up with announcements in the updates thread

Landmarks are included in the map index for reference, and are neither created nor under the management of the Eridianus team.

Walk southwards far enough where the sky rolls back to bare the stars. Where the southern lights blanket the horizon at night as rippling waves of an arcanospheric sea, then you will know you have reached Eridianus.

The Eridianus region extends from the Blue Hills to the Southern Sea, spanning the full length of Barnstable Coast until the westernmost edge of Yh’mi. It is a place in between places, a liminal space, an un-land un-anchored to the Real where the walls holding back the Otherworld wax thin.

Reality is fractured here; all a matter of fantastical things have slipped in through the cracks. The dangers are deeper and stranger than the rest of Lagrimosa's already dangerous Wilds. The atmosphere is thinner, for one, the air crisp with the scent of ozone. False stars fall in showers. Storms flash with ultraviolet lightning. Sunlight rains from luminous clouds. Winds sweep travellers into other worlds.

Many attest to the difficulty of travel in Eridianus. The further one wanders, the more the lines between space and time blur - timepieces and compass needles can, and will lie. One may see mirages of distant realms, perhaps even glimpses of otherworldly cities. One may encounter festivals held by stag-faced folk or schools of glittering fish darting through the sky. One may hear creatures speak in human tongues or hear lonely songs from the stars.

All wanderers are advised to be cautious. Take careful note of the borders of each path and never step beyond them. Off the paths, one may indeed find adventure. But equally likely is it for wanderers to lose their way, forever doomed to walk the wilds under the stars’ indifferent gaze.

The instability that plagues Eridianus seems to respect the boundaries of defined roads or paths. The Terran MagVac train remains the safest and most accessible method of transportation across large distances in the region.

Recently, however, the Zatrikion have begun to map the paths of rural Eridianus, ensuring these roads are clearly-marked and constantly illuminated. Travellers can now easily see these strings of light - aptly called lightways - branching off from the main MagVac railway, leading either to specific Enclaves or other major settlements within the region. Train stations have now also been constructed at these intersection points, per an agreement between the Dynasty and the local Terran government.

Despite the relative safety of these lightways, adventurers are still encouraged to travel in groups. Many Zatrikion outposts are located near these lightways, and many a caravan or adventuring party can request an escort from the Enclaves military here.

Within Eridianus’ quiet madness lies several enclaves - places whose Genius loci are stable enough to become lands distinct from the region. These enclaves are almost worlds of their own, each an oasis in the barrens of Eridianus’ irrationality. Each Enclave has varying levels of magic and technology as well as distinct geographies, peoples and cultures.

Apart from the enclaves, there exist other territories within Eridianus whose loci retain their old aspects. The most notable ones are as follows:

The Moonwood is a forest that exists in a dualistic state, half physical and half spiritual. It houses the gateway into the spiritual realm where the Fairy Kingdom resides and operates at one-sixth the planet's normal gravity.

Casper is the Terran Empire’s primary sea port. It remains under the authority of the federal government, though the Casper loci is currently in contest with Eridianus for homeostasis. Of late, this has resulted in a breathable atmosphere for both land and aquatic species simultaneously.

Eridianus’ government is decentralized. Each constituent enclave of Eridianus has full sovereignty over their respective territories. The exception is Suladiaz, which is ruled by the Parálios Dynasty.

Most nations within the enclaves, however, have a bilateral pact with the Parálios Dynasty. These pacts vary with each nation and can involve the establishment of local Khartes branches, trading agreements, and/or exchange of military aid.

While no single political power governs the whole of Eridianus, the Parálios Dynasty are generally recognized as the dominant authority over the region. The Dynasty also oversees the two major institutions of the Eridianus government -- the research and development institution of Khartes and the Zatrikion, the collective military of the Enclaves.

The Dynasty facilitates all interaction between constituent nations. It also acts as the intermediary between the nations and political entities outside Eridianus, such as representing the nations of the Enclaves in the Alliance of Sovereign Nations. All travel and trade within Eridianus, between the enclaves, is monitored by the Dynasty -- owing, in part, to the unique relationship one of the princes has with Taen’s Genius Loci, the root of the Eridianus loci.

Khartes is the primary research and development institution of the Enclaves of Eridianus, focusing on the creation, refinement, and application of various technologies for the benefit of the Enclaves and its residents. Khartes’ headquarters is Site Somota in Suladiaz City.

As it mostly operates independent of the Dynasty, the institution is headed by a board of researchers composed of representatives from each nation in Eridianus. Khartes has local units in nearly every Enclave that operate under the authority of their local governments, sometimes even going by different names. The board of directors mainly supervises projects that require coordination between units in separate enclaves, disseminate relevant research to the units, and bring region wide issues to the Dynasty.

While most nations of Eridianus have their own military, the Zatrikion is the name given to the  collective forces of the Enclaves dedicated to keeping the peace of the region as a whole, ensuring safe travel through Eridianus, and defending the Enclaves from various threats. The Zatrikion center of operations is in Suladiaz, though several outposts of theirs are strategically located across the region.

With their origins rooted in Taen’s City Guards, the Zatrikion are the most experienced in navigating Eridianus’ surreal geography. Their work primarily involves trekking through the wilds and helping escort people and cargo safely across the region.

The region of Eridianus has its origins in Taen, a land trapped in a pocket dimension that forged a connection to Lagrimosa’s Blue Hills in early 595 WTA. It became possible to travel into and out of Taen through a series of portals that would appear in the Blue Hills. The strange land was eventually populated, with the beginnings of an empire founded in this strange new world.

Unknown to most, Taen’s loci was one that sought to expand and subsume as many locations it was capable of, bringing its strange magics and environment with it. When the empire within Taen moved to conquer a set of islands in the south, Ursa Madeum, the Taen loci followed. It seemed as if Taen’s loci had attached itself to the empire and was using its expansion to further its own growth.

In 597 WTA, however, the death of the emperor and a change in the empire’s leadership halted any further conquest. The empire, then under the name of Veluriyam, withdrew from Ursa Madeum. Still, other events contributed to Taen’s expansion. Trade between Taen’s cities and greater Lagrimosa continued. The new ruling family of the empire, the Paralios Dynasty, continued to make political alliances with other settlements. The activation of a massive, ancient loci-editing machine in Taen, which had previously formed a portal between it and the land of Yh’mi, also contributed to the  instability of the pocket dimension.

In 598 WTA, all these small steps culminated in the collapse of Taen’s pocket dimension. Like a bubble bursting, the pocket dimension’s collapse gave way for the Eridianus loci to anchor itself in Lagrimosa. The land of Taen became a permanent part of the Blue Hills, while a new region took shape in southern Lagrimosa.

Shortly after, the Paralios Dynasty dissolved the original empire that had begun in Taen. The Enclaves of Eridianus became a nation built on a delicate balance of isolation and agreements, each enclave virtually a separate realm into itself.

For a full timeline of Eridianus’ history, open the spoiler below.

Events are arranged from latest to oldest, with most recent events at the top.

Wade, Zashiii, Jotnotes and 6 others reacted to this
Sign in to follow this
Followers 0
Go to articles