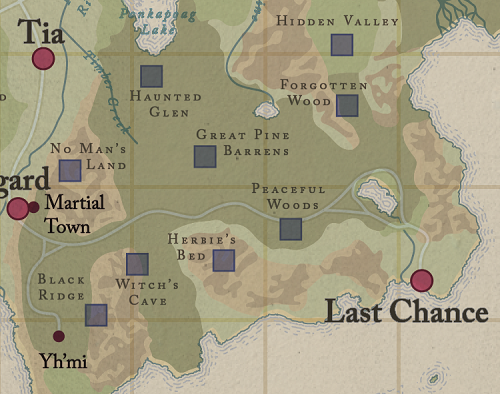 The Great Pine Barrens are the largest wooded area in Terrenus and take up a large amount of the continent in general. Due in part to its size, and in part to the odd collection of people and energies inside of its tree covered paths, the Pine Barrens are home to a diverse selection of races. The animal life here is savage and exotic, some of them shockingly large and powerful while others nearly imperceptibly small yet equally as dangerous. It is a melting pot of creatures and creation alike and thanks either to natural adaptation or man-made intervention, the creatures of the Barrens are dangerous.
Though most of the Desecrator legions had been wiped out in the Crusades a little over twenty years ago, there are a few families that live on in the Barrens. Those who lack the talent or patience to blend in with the masses, or who do not favor gaining political sway, or who have not taken refuge among the criminals of Last Chance, choose to reside here.
There are rumors, scant and hard to find even when looking for them, that Zengi the witch-king has made his return and resides in the place he made his home six-hundred years ago: the witch's cave, near the southernmost leg of Timber Creek. In his day and age Zengi was a powerful and influential force of negative intent. He is blamed for the tidal wave that damaged Casper six hundred years ago, the sabotage of the Noble houses, the propagator of the invasion in the Hidden Valley, and recently undeniable evidence has surfaced that Zengi also brought into being the terrible plague that swept through the lands in that era. Given his necromantic proclivities it is feared that Zengi has only grown stronger after death.
Zengi isn't the only celebrity to call the Great Pines Barren a home. A thousand years ago Herbie was a simple potato farmer born and raised in Terrenus to simple parents who had a knack for magical systems and arcane typology. Before long other great minds gravitated towards his own and Herbie made friends with the revolutionary geniuses, the Scudders' brothers. Together they laid the groundwork for modern magical theory, invented the field of arcane telemetry (which is the basis for contemporary arcane cryptography), put magi-tek on its feet and contributed vastly to runic architecture. Less than a year after meeting the genius centaur twins Herbie abandoned the city life in his search for God-Truth and wound up in the Pine Barrens, where Herbie made a Bed for himself.
Herbie is lauded for such acts as helping to overthrow the tyrannical King Levas and toppling the monarchy, of convincing the King of Fairies not to 'cleanse' the human race off the face of the earth, who found the necropolis hidden in the Forbidding Hills, who fashioned the Terrenus' first Sanctuary spell based on the Peaceful Woods, and who some allege was directly responsible for Zengi 's death.
Canon

No Man's Land is a curious patch of earth stretching from the base of a nearby mountain two miles to the east and 15 miles to the north, following along the mountain's natural border for the whole upper half. Passerby's report a feeling of general unease. Extensive investigations have revealed nothing suspicious in particular, home to the usual range of Terran beasts though a handful of scientists have remarked that intelligent, self-aware creatures seemed to keep their distance.

To the sight, No Man's Land is perfectly described by its given name. it is a wasteland, one of utter desolation with fixed boundaries, the waste neatly delineated by a thin line separating the waste from the verdure of the adjacent forest. This border has never been known to either shrink or grow. Nothing is wrong with the scene, no sense of foreboding or danger hangs in the air, but the utter lack of anything alive has a depressing effect on the conscious mind and hikers are urged along to the mountain, where the interminable silence finally ends, to continue their journey across Terrenus.

No Man's Land was named by the great sage Herbie hundreds of years ago when the Scudders' Brothers ostracized themselves from civilization and left Herbie's genius mind distraught with idleness. The land is so called because it is where Herbie performed the vast majority of his later experiments, and he asserts that it is not a land 'upon which mortal men are meant to dwell. It is indeed and foremost a playground of the gods of ideas and nature, whose expression is not meant to, and cannot, be tamed and restrained'. No Man's Land is, quite literally, a land for no man.

Recent advancements have brought with them finer tools for the measurement of natural forces. This applies as much to the technological concept as to the spiritual. Saint Odin Haze, upon passing through No Man's Land for the first time, returned to Ignatz a few months later with schematics on new telemetry devices. These devices record astonishing amounts of energy that operate at the 'white level' frequency, facilitating the natural processes of healing, creative thought, ingenuity, and empathy.

The Saint has gone on record as remarking that some who report unease in passing through No Man's Land are the source of their own discomfort. They see waste and ruin, and so afflict themselves with the negative connotations those thoughts attract. Those truly in tune with their surroundings might find themselves moved to tears at the grand display of life to be found there. Saint Odin Haze, calling to the mind of the general public that Herbie was a notorious trickster, regards No Man's Land as Herbie's greatest practical joke.

Herbie's Bed is a cross-section of land comprising a little under one-tenth of the total surface area of the Great Pine Barrens. It is comprised primarily of shale and breccia with interspersed pockets of rhyolite. At the very peak of Herbie's Bed an observer is given an uninterrupted view of the Great Pine Barrens, stretching for miles in every direction but south, flooding the eye with the lush greens of vegetation for 220 degrees. The remaining 80 degrees are completely occupied by a breath-taking view of the Southern Sea, looking like cascading sheets of gold at sunrise and a blazing pool of cerise fire at sunset.

This vast dichotomy of nature has inspired awe and has been the direct source of inspiration for some of Terrenus's greatest painters and scientists.

The savvy Terrenus cartographer notes a certain curiosity in the fact that Herbie, arguably one of Terrenus's greatest magician, scientist and overall force for good, made his home in direct proximity and competition with the abode of the sinister Zengi, arguably one of Terrenus's most malignant and driven forces of evil. Some Druidic mystics have noticed an odd corruption at the exact point where the boundaries of Herbie's Bed meets the boundaries of the Witch's Cave, but are as yet unable to determine a cause.

Herbie the Sage is talked about rarely save in the most advanced scientific and occult circles. To some he is known as a mystic of extraordinary power and knowledge; to others he is known as one of Terrenus's most famous scientists, pioneering the field of magical theory in an age of base superstition.

Herbie has had a direct hand in the development of various well-known places across the face of Terrenus. The ones most widely recognized are:

A long strip of rocky terrain extending through the south-eastern part of the Great Pine Barrens. It is a place that seems afflicted by the most perverse desolation but which those sensitive enough will vow is a place rich with life and energy. Odin Haze has called No Man's Land Herbie's greatest practical joke.

The Hidden Valley is the only place in Terrenus, and arguably the whole of the Valucre world, that is completely hidden away from all forms of divination or scrying. The effects guard solely against the arcane, so telescopes and the like can see the Hidden Valley but have a hard time penetrating its thick canopy. Herbie is rumored to be the source of this anti-divination.

This area is affected by an odd effect that causes the gravity to mimic that of the moon. Although this effect is generated by the magic of the elves that live in the Moonwood, and not through the hands of our mystical Sage, Herbie nonetheless has history in Moonwood. Herbie managed to bring peace to Moonwood just as the King of Fairies was about to unleash his deadly army to sweep the lands of the wicked King Levas.

The narrator has taken the time to expound on a few of Herbie's most infamous, past achievements for the sole purpose of emphasizing the importance of this piece of Terrenus land in particular. The appropriately titled slice of land known as Herbie's Bed was indeed Herbie's home, and home as well to a number of priceless artifacts of untold power.

The Peaceful Woods border the Great Pine Barrens' south-eastern flank and fringes a small mountain range. As its name suggests, it is peaceful. No, no. Peace truly reigns supreme in the woods. Nothing can come to harm in the Peaceful Woods. Nothing. There is no might in the world that can injure anyone or anything within its bounds. When the Desolator covered the world in darkness, the Peaceful Woods and its inhabitants alone remained unaffected.

Ever since its discovery, it has been a popular training ground for newbie Terran soldiers. They can strike each other with spells and swords, but nothing happens. Nothing is cut, and nothing is bruised, neither wood nor flesh is burned. The Peaceful Woods defy the circle of life as mankind knows it. Nothing is ever seen eating anything else except sap excreted by the ancient sequoias that make up the woods. It is thought that the sap from its trees is distantly related to the sap in the forests outside of Biazo, but since the trees cannot be dissected, and stealing the sap from animals that use it as sustenance counts as a malicious act that causes harm, it cannot be taken except for eating and quenching thirst.

It is known from folk stories passed from old tribes to traveling bards to history books that the Peaceful Woods predates written history. The sanctuary is thought to have been forged by many clans of shamans working in tandem, the only two still known by name being the Coconino and the Shawnee; the latter tribe still exists, but they have secluded themselves on the Shawnee Glacier. Nobody really knows what happened to the Coconino.

Surprisingly few people live in the Peaceful Woods. The only permanent residents are few and far between, and they enjoy their seclusion. But there is a friendly bunch of talking red foxes, bright eyed and bushy tailed, that lope around guiding travelers and spinning unbelievable tales for anyone who will listen. Perhaps they might know something of the Peaceful Wood's past. Of course, when people leave the Peaceful Woods, if they follow the foxes’ advice they tend to get into some kind of trouble.

Since the existence of Unnaturals is harmful in and of itself, they cannot enter the Peaceful Woods. They literally bounce off. This property is highly coveted by the Gaians, but they have been unable to replicate it; their sanctuary spells are feeble in comparison. Notably, the Peaceful Wood shrinks by approximately one-fifth of the distance the Shawnee Glacier recedes every year, making the reproduction of its tranquility a top priority.

It is heavily rumored that the Peaceful Wood is the way it is due to Herbie the Sage creating the first ever Sanctuary spell on this land.