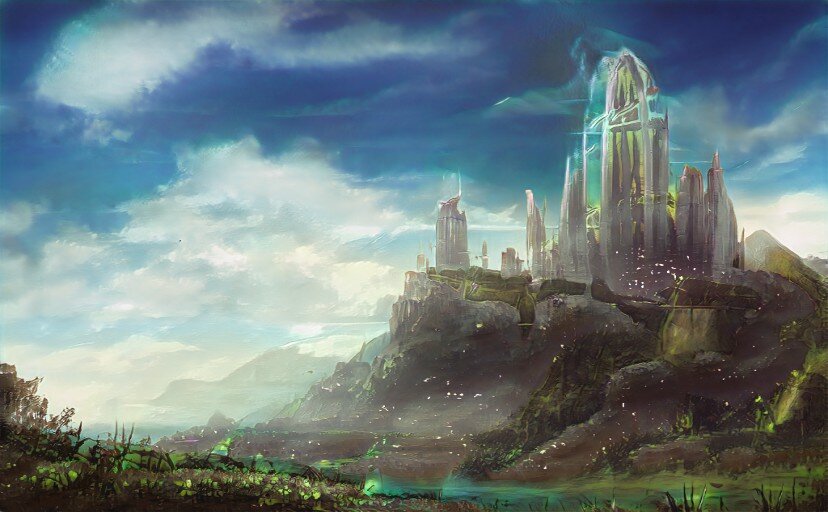 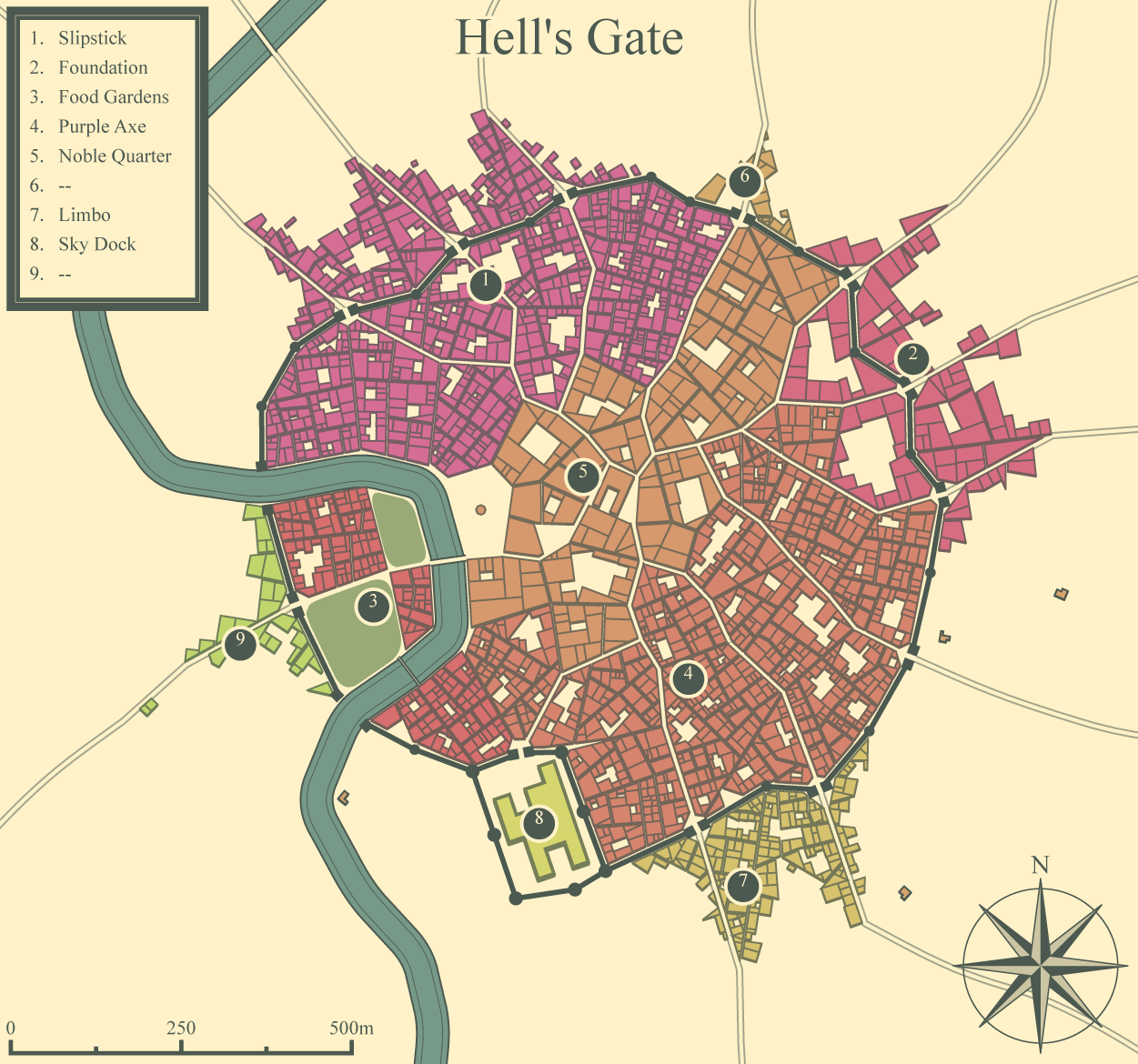 In the original Terric, the city's name translates loosely into The Ward Against Inferno. It was only after the Oligarchic Republic fell in approx. 853 BG that the city was renamed to Hell's Gate.

A serial killer talks the streets of Hell's Gate, and seems to be targeting the members of a specific religious order known as the Order of Thorns.

Young PeaceKeeper Michael enrolls into a combat surveillance program which sees him partnered with a "slice" of the Victory ASI (artificial super intelligence).

Geography
Terrain
Hell's Gate straddles the line between the Wilds and the Wastelands. To the east lies a wedge of searing desert that's familiar to the locals but the northern stretch of the Wastelands has transformed into frozen tundra as a consequence of its loci losing the existential war it had been waging against the Shawnee glacier. To the south and west stretch hundreds of miles of savanna and to the southeast lies Limbo, a salvage yard with rife with scraps of transport and weapons technology and an organized shanty town with a market around biomedical operations.

Stepping within the city limits of Hell's Gate, one feels the full weight of Terran brilliance bearing down from every angle. The architecture is unlike any other in the whole of Lagrimosa. The buildings reach to dizzying heights.

Tectonic faults have been patched up by Gaian Engineers, removing virtually any threat of earthquakes. The bases of the buildings are modeled after massive trees, with complex root systems reaching down into the earth and anchoring the buildings against powerful winds. The buildings themselves are truly massive. Several of these are 'micro-cities, internally self-sufficient and capable of being completely isolated from the rest of Terrenus with regards to energy, food, and waste disposal. For now the micro-cities are built with educational entertainment and leisure in mind.

Social Temperature
Note: Be mindful of the fact that the above thread was first posted years ago and the setting (conflicts, opportunities, etc), being in constant flux, have no doubt changed

Climate
Hell's Gate's ambient temperature was originally to the point that only Wasteland natives were capable of settling. A massive underground aquifer fed by various channels from a water source far west was the city's only source of water. In the flourish of knowledge and magi-technology since, Hell's Gate ambient temperature is at a more tropical and an artificial river running through its direct center is used for trade and washing but kept clean enough by internal purifiers to classify as potable.

Elderberry: Elderberry is a fairly abundant plant used in a common form of Terran divination which uses tea leaves. One variant throwsthe leaves on the ground or in the air and predicts the future by how they scatter. The most common involves drinking a tea made of elderberry and navigating through cryptic and symbol-heavy delusions to decipher the threads of fate. It is dark brown or dark red and usually around 40 centimeters in length. 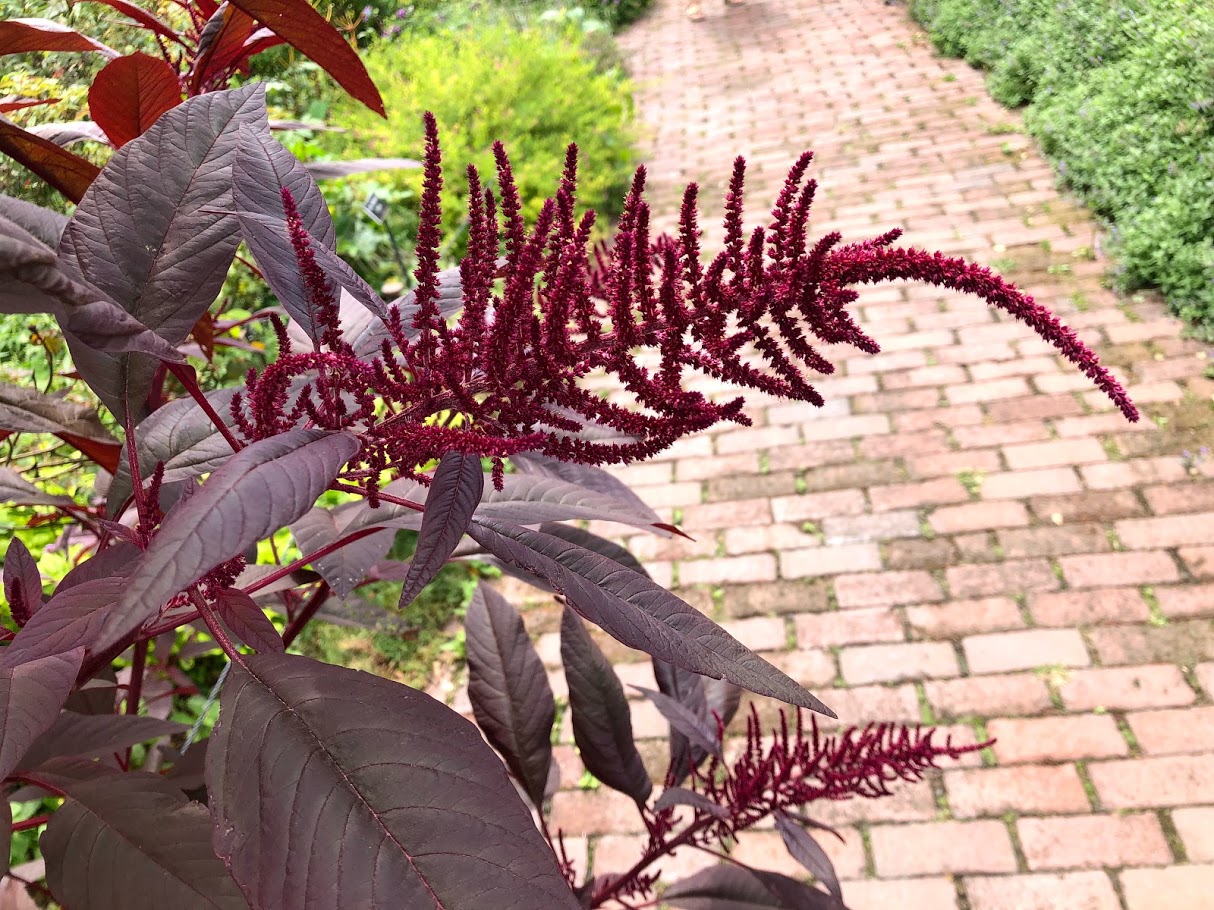 Demographics
Culture
Eustace Monroe, esteemed civil engineer before becoming mayor of Hell's Gate, has been quoted as saying that "if I see Gaia in anything, I see her in nature. As much in the elegant mathematics of a flower as in the intrepid manner that all life. Even life-less forms seek to defy their chains. So as the storm rages and the lightning cracks, so as the waves swell and drown the lands, so as the fire blazes and consumes all, so as the mountains reach for the heavens I tell you that man is more audacious yet!"

Economy
Hell's Gate is the largest manufacturer throughout the nation of Lagrimosa. As a governmental entity Hell's Gate and an array of private entities inside of Hell's Gate constitute a singular royal warrant holder with Empire and maintains a monopsony business model with them. The first means that they are a preferred seller of goods to Empire and the second means that Empire is an almost exclusive buyer of Hell's Gate's highly engineered goods. This has been the case not only through the Haze era but for centuries, an arrangement that Empire more adopted and refined than cut out of whole cloth. Hell's Gate ranks among one of the wealthiest territories in the world.

Some say that Last Chance is the home of all criminals; Hell's Gate says that our criminals are so crafty that they get paid for their crimes. Some say that Biazo is a haven for decadence; Hell's Gate asks, can there be a level of indulgence above that which scientists undertake every day, probing into the deeper mysteries of God?

Hell's Gate is the Research & Development center of the whole of Terrenus. Habitation in Hell's Gate is not exclusive to the greatest minds that the nation has to offer, but engineers, analysts, and logicians are among the brainier bunch and they can be found almost exclusively in this futuristic city.

Technology in Terrenus is unlike technology in the rest of the known world of Valucre, and conflicts even with the electricity based technology to be found in those strange realms outside of Valucre's physical scope.

Technology in Terrenus can be defined by more abstract "knowledge" than it can by material components, which is why it is magi-tek. A refinement of technology, then, comes from a better understanding of magic as opposed to an addition or subtraction of physical components to a machine, which is merely used as a conduit for the magic anyway.

Dr. Eustace Monroe is the model citizen of Hell's Gate. His ultimate search is one for knowledge. In his search for Truth, Monroe has sacrified trust, love, integrity, pride, friendship, and innocence and he shows no signs of slowing. The man is warm, amiable, charming, and distinctly intelligent but, if around the man at certain times of crisis, one wonders to oneself if the man has any limitations. Any boundaries that he wouldn't cross in his infernal quest.

Hell's Gate is the locus of the scientific progress and technological revolution.

Dolor Aeternum, Purple Eagle and The Alexandrian reacted to this
Sign in to follow this
Followers 0
Go to articles