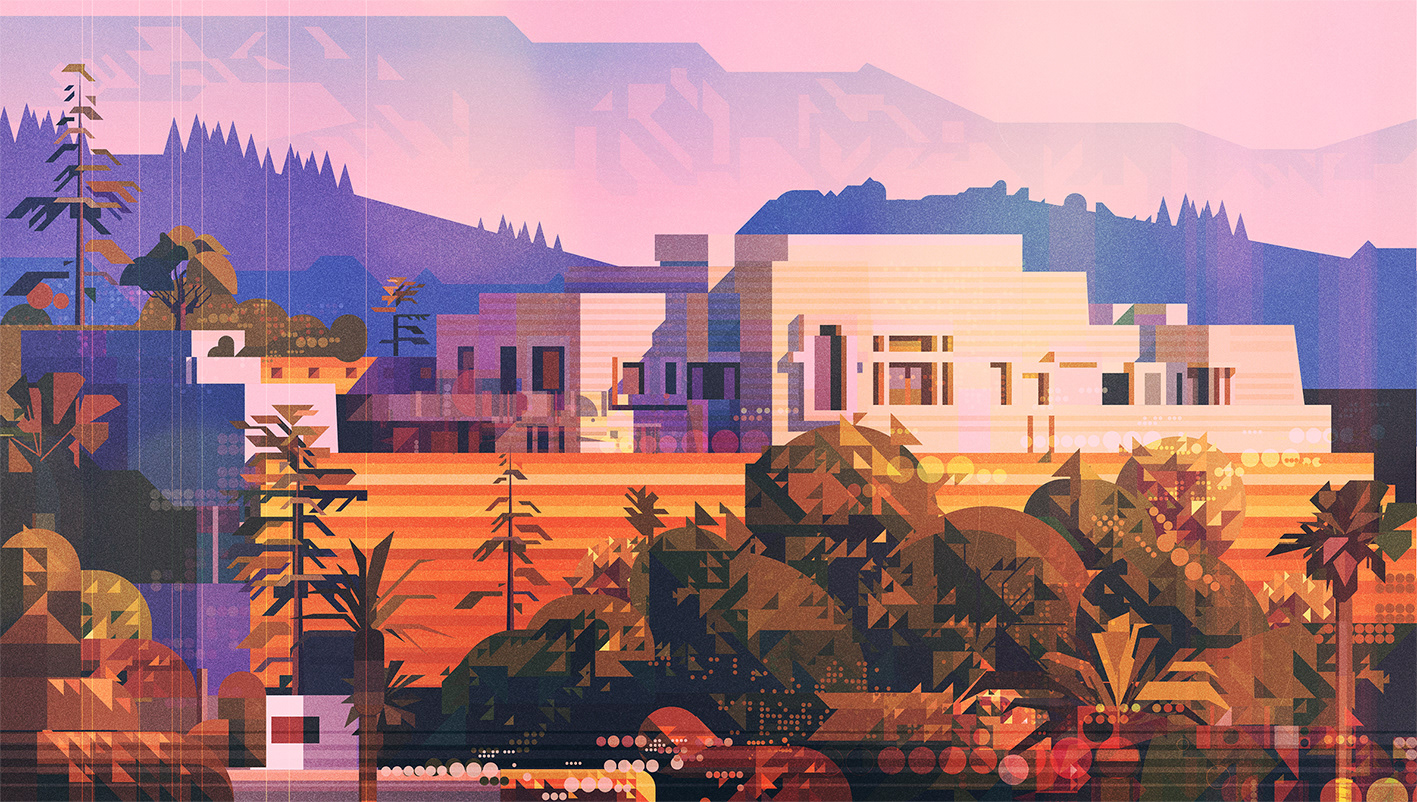 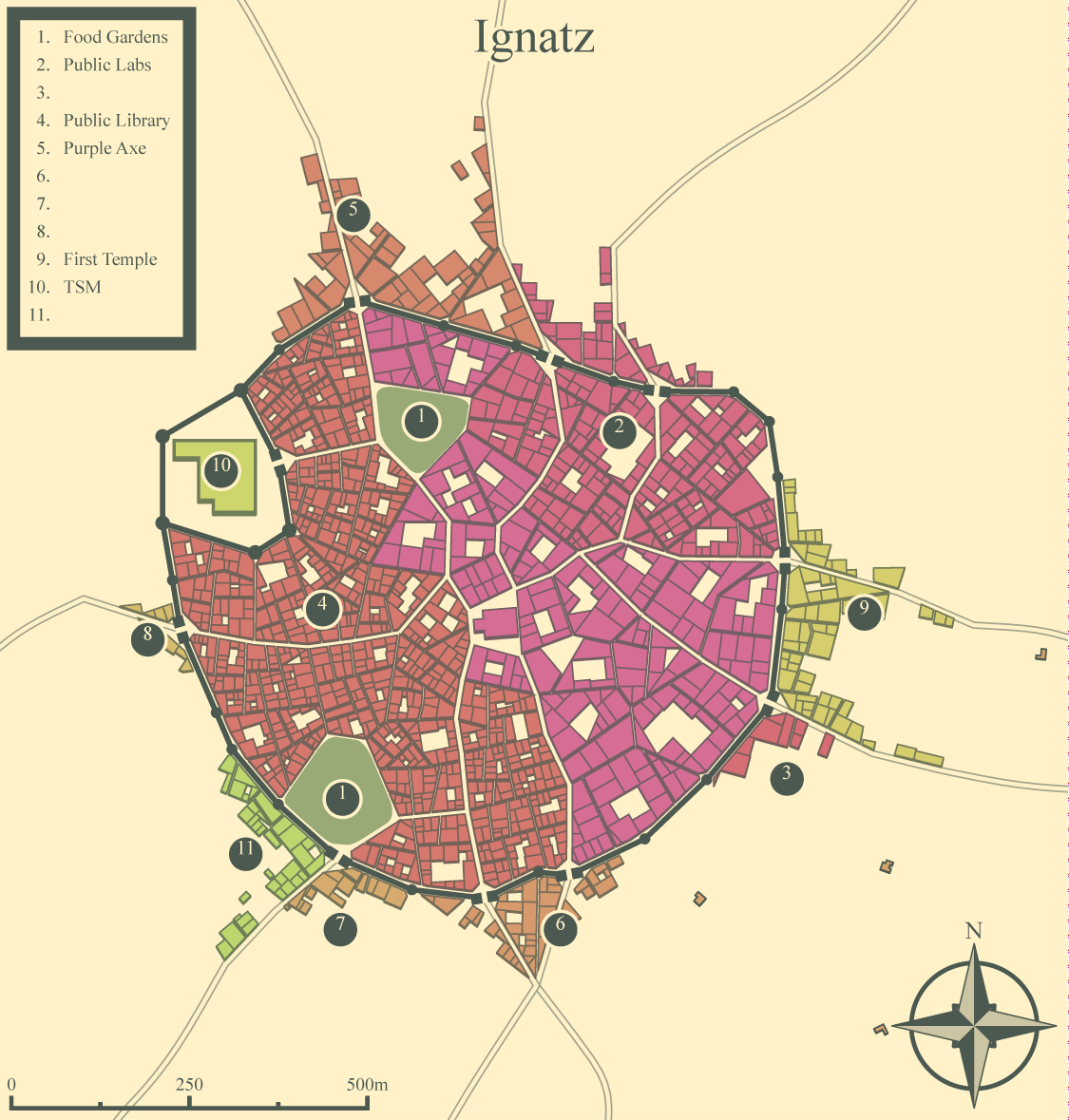 Ignatz is a a religious Mecca for Gaianists, located in a valley between an unnamed mountain range and the Blue Hills. Ignatz has a population of approximately 6.3 million as of 24 AO. Due to the concentration of the Gaian faith, the constant prayers and blessings, nearly every square inch of Ignatz is holy land; the waters that flow through the city, feeding people and animals and plants, is blessed.

If you're looking for an adventure, check out the Ignatz Quests

A minor explosion in the middle of Ignatz, at the funeral for a dead hero, has the city on high alert for terrorist activity.

Ignatz is a swell of curves rising out of a valley. Plains of lush grass consume the vision in all directions; the eye grabs onto the occasional lazy smokestack of a faraway village but finds little of note save for the mountain range in the north-east.

Until the eye reaches Ignatz. The closer to that glorious city, the more life flourishes in manifold permutations. For the sight there are violent explosions of wild flowers in random patches; for the scent the exotic perfumes of Mother Nature braid the air. The Gaians have learned to work wonders and it shows in the jungle of life framing their city.

The Blue Hills and Ponkapoag Lake, which are south-west and east respectively, are within questing distance but comfortably out of sight.

Unknown quantities of small tributaries feed from Coconino Marsh and collect at Ignatz's southern end in a grandiose reflection pool. The water's location and angle makes the sunsets pretty most of the time, but stunning and a lucrative tourist attraction near the beginning and end of spring. Quadruple rainbows are a common occurrence during these times.

Below is a list of nearby locations and their approximate distances

As a natural consequence of the disproportionate number of holy artifacts and temples, the crowning point of which is the First Temple of Odin Haze, Ignatz is blanketed by a sense of peace.

Ignatz's status as a Mecca aids in its natural appeal to practitioners of the Gaian faith, newcomers will notice a high incidence of civilians dressed in the attire of the clergy. Architecture in Ignatz makes a great deal of use of supporting pillars and the magnanimous Masonic Arch is employed in residential sectors. Features like heated floors, indoor plumbing, sonic dampening or amplification are results of ingenious civil engineering rather than dependence on magic or magi-tech.

In addition to being built with advanced biomimicry principles in mind, Ignatz and a few miles of land on all sides of it are geomantically cultivated.

With rare exception the weather in Ignatz is decidedly pleasant. The springs inspire creativity, the summers kindle love, the autumns calm the spirit and the winters are Elysium glazed with snow.

Like all of Terrenus, Ignatz shares a lot of flora and fauna with our world. The below are just a few of the notable exceptions.

Rock Fireflies (Insect): These cave-dwelling insects give off a light that stimulates accelerated biological healing in mammals at a rate of 3.5 times the norm. They are collected and grown in Gaian Temples in environments conducive to a stable ecosystem.

Leoporidae Terricus (Animal): Otherwise known as 'the Terran hare'. Ignatz's serene atmosphere and cultured surroundings make an ideal breeding ground for these precocious hares that like to randomly heal the passerby that gives them a snack.

Fire-Burst (Fruit): This bright crimson, flame-shaped fruit is a class M limited resource in Ignatz. This classification prevents the selling of this commodity or the making of any profit off it but allows citizens (actual members of the registered body of Terrenus) and civilians (non-citizen residents) to brave the trees's intelligent defense (by smashing limbs and whip-like vines) to take their fruit. Ingestion of the fruit produces a temporary pyrokinetic ability in the eater.

Below is pictured an unripe fire-burst. 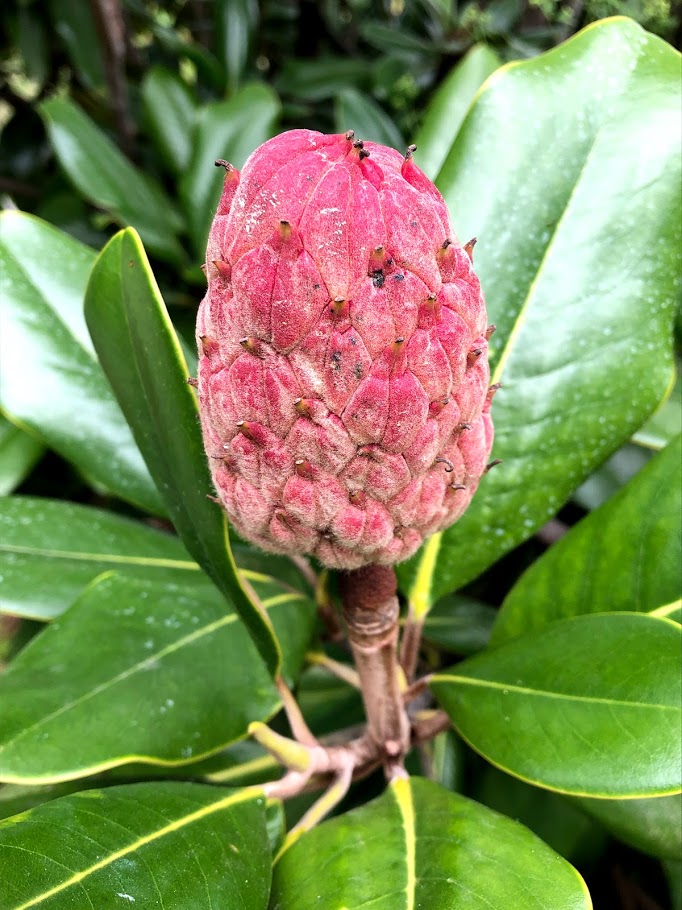 Gaian philosophical principles and its prevalent in Ignatz has made for a happy, friendly and generally courteous local that will fight to the last tooth and nail for what they truly believe in. Odette's love for all things scholarly and her emphasis on educational and social reform has also contributed to a rise in scientific and magical literacy.

The locals are kind and clever.

However there is a subsect of local life that embodies curious wedding of good-natured Gaianism and academic zeal. The 'sacred trickster'. A social variation most prevalent in the very young and the very old that takes delight in teasing and testing their contemporaries. This usually manifests by way of word games, logical fallacies, and pranks that lead to life lessons.

Ignatz's economy is strong and stable. As the concentration of Gaianism, Odette's reform, and the presence of the First Temple all make for both a massive lure and a refinery for earth-benders, Ignatz's main export is skilled geomancers. Some of the finest civil engineers and architects, artisans of metalworking and crystal-shaping, go to and come from Ignatz.

Ignatz also excels in the field of Botany, second only to Dougton in terms of food production, farming techniques, plant breeding and mutagenesis.

Thanks to Odette's reforms and active hand in the development of educational institutions, literacy and scientific and arcane comprehension are at an all time high. Ignatzian education focuses primarily on botany, geomancy, and pneumatology.

Odette Albright, daughter of esteemed Rosinderite scholar Lucian Albright, immigrated to Terrenus, driven into the annals of Terran history by her eternal search for the truth. Access to her father's archives and his mind, a commodity that nobles pay with heavy bags of gold to acquire, made a witty devil out of young Odette; her Rosinderite blood gave her the obstinacy she needed to succeed.

Her work as an assistant editor for her father's newspaper allowed Odette to leverage herself into positions ever more lucrative with competing papers and agencies. She soon amassed enough wealth to fulfill her dream of questing from distant land to distant land, all in hopes of finishing the International Collection of Wisdom and Knowledge, her magnum opus.

Her travels, which took her first to Muhir and Renovatio then to Genesaris, eventually found her in Terrenus shortly after the Crusades wiped most of the Desecrator legion off the map. She met Odin personally and aided him in serving food and building shelter for the suddenly homeless.

Odette navigated the streets of Ignatz until she found a library to her liking and claimed her stake there, bargaining room and board for her services as a librarian. Her first introduction into politics came at the hands of the mayor before her, whose financially imprudent decisions nearly led to the foreclosure of the library.

17 hours later, Odette found a loophole in the zoning ordinance that made a permanent fixture of the library. 3 days after that Odette introduced her candidacy as mayor. A month and a half later she was mayor, and Ignatz has been making progress in areas of education, social welfare, parks and recreation, and technology ever since.

Saxonyx, Csl, Darien and 4 others reacted to this
Sign in to follow this
Followers 0
Go to articles