As of 2019-03-03 and the events in destruction des morts, Tia is defunct as a mega-city. It is playable only as ruins / partial infrastructure and has been removed from the map 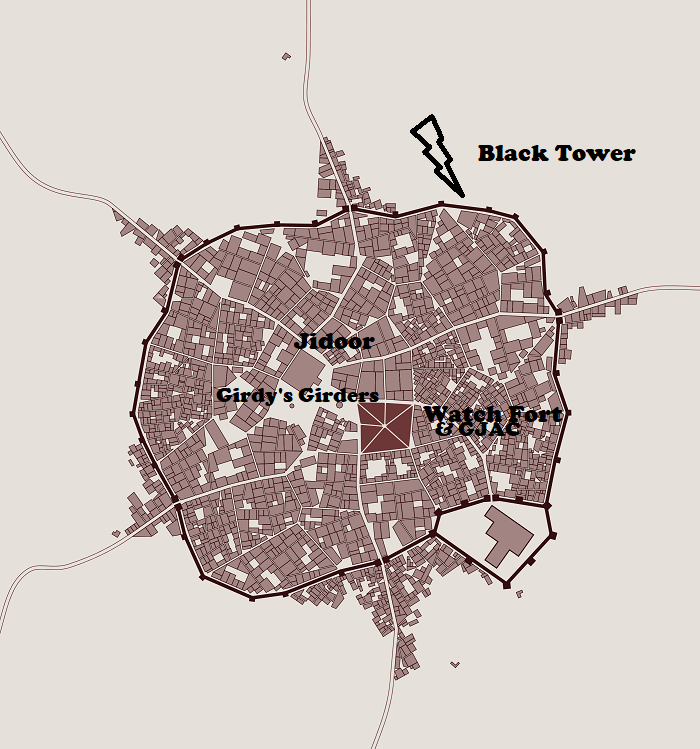 Tia has always been a precarious dichotomy of order and chaos between humans and vampires. In recent months, tides have shifted from human rule over to vampire. The former humanoid ruler, Nica Sero, has been taken prisoner by vampires of the Dolos and Matton families. These relatives of the former Viscount of Tia now claim rule over the empire. Suspicion in Sero’s ways keeps even humans from questioning why he was deposed. The kingdom has fallen to warring malaise its wake, deprived of its illusory peace and determined to place the blame on somebody’s shoulders.

Tia was built on a point of convergence between rivers, creeks, and glens; sodden ground at the surface, but finds stability deep in Valucre’s crust. Pipelines and mining floors reach from there into the mantle in order to harness its heat and fossil fuels as energy. These steel behemoths of Tian industry are draped with brambled foliage and shredded fabric. Ground level Tia resides atop one slab of granite and one of steel. Five pumping rigs larger than any on the face of the planet dot the city with enclosed and guarded vents and shafts that access their underground mines. It is neither known how far down the mines stretch, nor what goes on beneath the -5th story (Classified). Stretching kilometers into the sky beside these monoliths are the many newly sprouting corporate offices and residential towers.

Having begun as a black mark between Moonwood and the Haunted Glen, Tia stands a story of redemption and failure. Its roots lie in the darkness of the Desecrater era long past and stem through an uncertain age ruled by primal, warring creatures under the thumb Northern vampiric rule. After ages of tumult, a calm overshadowed the city so that it enjoyed the juicy fruit of industry, recreation, diverse social acceptance, and enlightenment.

The idea that the city was a safe place under the Sero regime has aged poorly. Humans lost trust in regent Nica Sero in light of news that he had been facilitating human trafficking with vampire nobles in order to maintain his own rule. The insidious ruler had been using blood magic to lure his victims into the city’s shadows, utterly decimating the humanitarian image he had fostered during the campaign that won him control over Tia. Nica Sero was a nefarious circuit of mysteries that neither vampires nor humans saw fit to rule any longer, but his experience dealing with the city’s complexities made him valuable. For this reason, Dolos vampire rulers did see fit to keep him prisoner and advisor, a palorous representative of palorous human interests in Tia.

Copper City demands redemption from its old, but new and demonic tyrants.

Tia is humid! Snow does not fall in the winter, but instead a most pleasantly rainy atmosphere surrounds the city. The summer heat has its citizens loosening ties and unbuttoning buttons. Spring and fall carry a variance between the cool winters and the warm summers, commonly rain, and a highly dense fog. The muggy air feels still these days, stagnant with death and fear.

The vast majority of Tian vegetation lies on the outskirts of the main city, where the expected spectrum of life thrives in a sufficient expanse of forestry and farmland capable of supporting such a metropolis. There wander into town a multitude mysterious creatures, however, due to its proximity to the Black Hills, the Haunted Glen, Moonwood, and the Lake. The number of incoming abnormalities are bolstered by vampire rule.

Body snatchers: Nasty and hive-minded, these alien buggers were awakened by expeditioners in Ponkapoag Lake and are known to take over minds.

Ghouls: With the increase in vampire presence and an open acceptance of their power, much of the human population who refused to leave has been converted to slack jawed ghouls. These zombie-like demis are created when a Dolos or Matton vampire sires an impure human (ie: a human who has lost their virginity) and will attack anything that has yet to be sired.

Drawn from the many very different surrounding areas Tia’s population began about as diverse as it comes, and not necessarily peacefully. As time went on and many factions warred for power both over and under the table all beneath the shifty rule of vampires with heavy thumbs, someone meticulously planned the bringing together of all its people.

Vampires were overthrown, then the next party, to make way for a politically sound gathering which, combined with spiritual techniques from across the face of Terrenus and a merciless militarization of law enforcement, brought Tia’s diverse wealth together as one. Clans who saw fit to victimize others were crushed or employed by a less niandrotholic, more business-oriented corporation run by city government. At least, this was the facade maintained by the last government.

Under the layer of ignorant joy settled over much of the population frothed discontent. Vampires were cast as evildoers on the surface world, even though they had just led a largely peaceful rule over humans. The propaganda that unseated them was written by human hands that were bloody with its own kind: Nica’s officients selling children and women to underground blood banks to sate vampires who would otherwise rise up. When vampires realized they could prosper just as well without the support of the human regime, they rose up.

Led by the Dolos first and second the Mattons, now Tia is a vampire haven imbibed with pockets of powerful human resistance. While many humans are victim to the attacks, a sect of them called the Rooks carries blessed ammunition with which to dispose of the vampire threat called X. Caliber.

For what could be referred to as somewhat of a golden age of industry, Tia had established itself as a Terran powerhouse of steel and steam to be reckoned with. That was before commute became a matter of risking one’s life. Before a sword maker had to worry he might be stabbed with his own product.

Now the steel behemoths of Tian industry are draped with brambled foliage and shredded fabric that blows in the ghostly breeze.

Fauxton: Synthetic protons attach to and break down matter, then are shot from one Fauxton receiver to another at near light speed using line of sight. Living beings can be transmitted through the Fauxton, but will experience almost debilitating discombobulation.

Thanks to the Fauxton being indigenous to Tia, most businesses in the city have unlimited access to their own Fauxton receivers. Because of this, shipping any business materials is easiest inside of Tia. Fauxton rentals are available from most city vetted Tian companies for a reasonable price.

Tia, the pinnacle of mechanical engineering in Terrenus, now seethes with trouble. Between steam technology and the manufacturing of steel, Copper City appeared to be on the rise for the past decade. The state of the city, however, is not all it appears to be.

Vampires viewed Tia as a city that was stolen from them. With the expansion of Gaianism, races like them who were less cohesive with its ideals began falling to the wayside. After a slow rise of resistance to their authority, benevolent vampires fell from positions of authority when a drug was introduced into the city’s water supply which drove vampires to bloodlust and deemed them unfit to justly rule Copper City. Since then, the vampires have plotted their revolution.

Afterwards, a more human-favoring ruler shifted public opinion against vampires. Humans and other humanoid races now find themselves on one side of a divide of hatred and mistrust between vampires and humans. Humans raid blood banks (voluntary blood donation centers for vampires) and distribute .X Caliber bullets- blessed silver made for killing vampires- for regular arms, sparking a giant mechanical arms race in Tia. Vampires attack humans with a new understanding of, and resistance to, holy magic. Fringe races such as goblins, ogres, and trolls must prove themselves friendly through overt acts of hatred toward vampires or be subject to the same prejudice.
Who sits at the top of Tia’s uneven power duality changes with the whims of the wicked wind, but one thing is certain: it is always a fight. Whether the rest of the city likes it or not; elves, trolls, dwarves, and demi-humans of all proportions are dragged into the conflict between the two. Which side one is on tends to be a larger topic of discussion than where one works or what they do for fun.

Tia has always born a rustic hue, both in color and culture. This copper giant of industry once focused solely on steam as a manner of energy, aptly gaining its nicknames Steam City and Copper City. The hands that have historically powered this machine are greatly diverse, ranging from humans to elves, dwarvess, gnomes, goblins, hobgoblins, kobolds, minotaurs, dryads, lizardfolk, and ogres. A sliver of this populace was afflicted with vampirism, primarily the noble houses, bringing Tia under vampiric rule for a time.

A mysterious organization poisoned Tia’s water supply and drove vampires to bloodlust, calling for the intervention of national security forces to expel them for the better of the city. Nica Sero stepped in, removing the viceroyship and installing a democratic government in which he successfully campaigned against yet another vampire family for rule. Under human  leadership Tia turned from its traditional, purist sense of relying on steam magic. Beneath Nica's formation of a committee of engineers and scientists, the city came to focus expressly on educating its inhabitants about magic and technology, further advances in application of steam in the latter.

Months ago, a vampiric propagandist machine uncovered the fact that Sero was selling live humans to the vampires in order to sate their bloodlust and maintain peace between vampire and human nobles. A riotous event led to the exposure of Nica Sero as a clone of an evil mage named Cain Rose who did the morally questionable behind-the-scenes work to which Tia owed much of its industrial success and the brunt of its peaceful years. Many of the city's former defenses, the Problem Solvers, ended up being under Rose's control, and fled with him when vampire forces raided the Black Tower where he lived outside of Tia.

Serafino Heretic Dolos, eldest of the Dolos clan of vampires, took control of the city with the Matton vampires as his defenders and direct lessers.

Csl, Brista, TheAncient and 2 others reacted to this
Sign in to follow this
Followers 0
Go to articles