"The birds fly as high as they can. So must we." 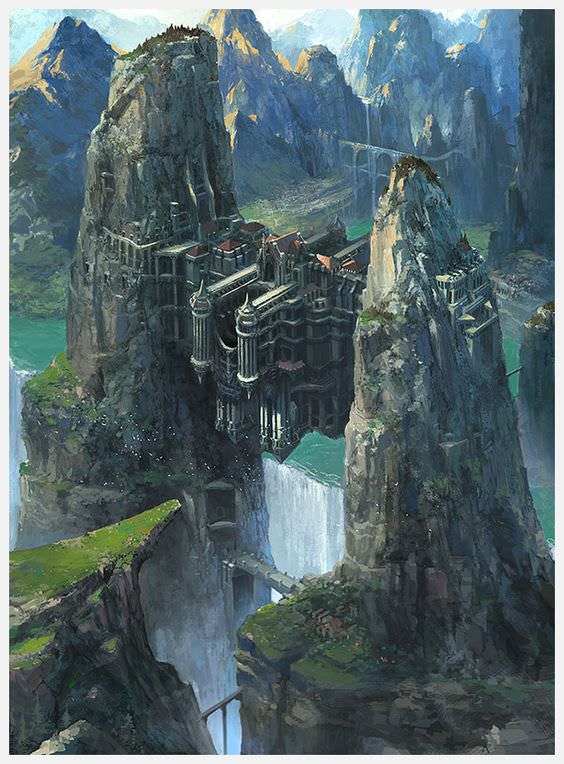 Regent: Alyssa Saveryn and her golden eagle companion.
Flag: A flock of five birds against a clear blue sky.
Contact: The Hummingbird

Resting above a cliff overlooking the calm Northern Sea, Raven's Landing is a modest, becoming city of many rough towers built of brick and stone and a unique religious belief found nowhere else. They revere birds as messengers of gods and the carrier of souls, delivering spirits to and from the ethereal plane. Ravens, crows, and predatory birds are considered especially holy, and killing any is dishonor. Civilians only eat flightless birds, such as chicken, and rarely.

For other cities, Raven's Landing serves the important function as the provider of mail delivery. Here birds are trained to carry letters of both leisure and significance across Genesaris when magic is not or cannot be used. Ravens and hawks are used most commonly, sent to fly to certain buildings to deliver their burden.

Birds are raised also for pets and hunting, available in any breed from ravens to golden eagles. It is rare to see any Raven civilian, even children, without a winged companion. Aeries are settled below the city and dug into the cliffs while others birds are given mostly free reign in the nearby southern forest. Fences and gentle magic spells are used to ensure peace between the species, and all are cared for, fed, and protected with love by all citizens. It is said that a few citizens share a telepathic bond with their birds. Others call this superstitious nonsense, though the intelligence of these creatures is quite uncanny.

Topography
Located on the edge of a cliff overlooking the Northern Sea, Raven’s Landing is a strong independent community with friendly relations with the equally strong city of Port Town and the capital of the West, Aelindra. Seemingly carved directly from the very stone cliffs upon which its greatest buildings rise and utilizing small islands on the water itself, the city is both a port and quaint metropolis. Many people make an abundant trade here where relations are at their most friendly and accepting.

Tall towers and spires dominate Raven’s Landing’s cityscape, with only a few squat buildings and homes to round out the architectural genius that designed the high-reaching stone structures. Glassless windows dot every  building, allowing the birds that make their living in the city to come and go with free rein. Most notable are the stone “branches” that are constructed from the buildings’ exterior walls, intricate and entwining webs of thin, reinforced rock and metal that allow nests to be built upon them.

Many of the structures in Raven’s Landing are painted with modest, becoming colors, though many of the great towers remain a slate grey. There is an entire absence of glass and blue paint, though, as there are birds who may think to fly through these surfaces that reflect the sky.

The tallest structure set in the middle of the city is the Ravenspire, where birds of all species gather, calmed by a gentle spell, to deliver mail that travels from cities all over Genesaris. Here birds are trained and often tamed, though smaller fledglings are sometimes captured from nests or taken when they are still an egg and raised at home.

On the outskirts of Raven’s Landing, deeper south into the mainland, there is a fairly large airship station, where five trading ships are docked and armed for self-defense and protection. Other ships for battle and luxury travel are also stationed here, guarded by well-armed soldiers from the respected Aplomado Military.

This kind of technology is prevalent in Raven’s Landing. Harmless sunglobes non-heat conducting lighting materials are used (again so as not to harm the birds), as well as warm and cold running water are available in homes and businesses. Many appliances and magitech are powered by the special magical crystals (for instance, stoves use fire crystals for heating) found in the deeper regions of Genesaris, shipped to Raven’s Landing by air and sea.


Climate
Raven’s Landing experiences a variety of climate changes, from warm summers to occasioanlly cold winters. However cold, the late seasons rarely, if ever, bring snow, subject more to rainfall and harsh winds brought in by the sea. High waves sometimes strike the city, but these are repelled by magical shields, and neither bird nor human seems to have been tempted to leave their city home for calmer lands.

Birds flock to Raven’s Landing throughout the year, drawn by the comforting heat the North is well known for. This warmth is apparent throughout the entire city and has been subject to criticism from the South, who believe this kind of comfort makes the Northern people weak.


Flora and Fauna
Flora and Fauna, especially high-reaching trees and birds, are seen all over Raven’s Landing. The birds contain all species, especially predatorial raptors – hawks, falcons, eagles, ravens – and more – pigeons, sparrows, hummingbirds, robins, and so on. There seems to be some kind of spell that prevents the birds from waging war on one another, as none of the small birds are ever snatched and eaten by thieir bigger, fiercer cousins.

Fauna of the earth, such as mice, squirrels, and other prey, are rarely found in the city alive, eaten by the hunting birds. Such animals are found outside the city I bountiful profusion, however, providing fresh food for the birds. Other times, prey are found frozen in marketplaces that specialize in special food and treats for birds. Fish is also a common dainty for both human and avian.

Culture
Although on the whole most are able to read, write, and count in adequacy, most people are more concerned with communing with nature and its abundance of life. Almost everyone, including children, are seen with a bird companion (most commonly the crow for most youthful). It is customary to gift one another with an egg or young bird by one’s fifteenth birthday, and most adults have more than one avian companion. It is important to note that no one thinks of their birds as “pets”  so much as ”friends”.

It is dishonor to kill a bird here, and eating any bird aside from a chicken or flightless birds is considered near blasphemy. Even those chickens and flightless species people do eat are rarely used for food. The most common staple that takes the place of people’s regular dishes is fish, strained from the sea in large nets cast form the coast.

Landmarks and monuments
Cliffside Aerie
Beyond and below the city and above the sea are dozens of aeries made for flocks of birds. Extending far in width and length, the sound of wings and the cries of many species are heard year-round as they hunt and tend to their nests. The aeries are occasionally visited by civilians to see if they can choose a pet; others visit to greet a bird they set free to mate and even “visit” their old friend’s family.

Ravenspire
This high tower, the tallest structure in Raven's Landing, rests in the center of the city and is often filled with ravens and crows, the most popular birds. The tower is largely hollow with only a long, spiral staircase set against the walls with spacious cages, feeding bowls, and roosts for the birds that have made this structure their home. The ravens and crows are not shy, often flocking to visitors in hopes of food. Most hoping for a blackbird as a companion go here instead of the aeries as the birds in the tower are more friendly and domesticated. This is also where most of the Raven's Landing mail is sent, tying a message to the bird’s back or to a small back harness and sending it flying, waiting for its return in the same place.

Government
Regent: Alyssa Saveryn, a spritely old woman whose eagle companion has accompanied her for much of her life.

Military: Aplomado Army
Named after the beautiful, sleek falcon, Raven's Landing’s army believes in being as fast and savage as the raptor, and that belief is reflected in the soldier’s daily, brutal training, focusing on agility and stealth and using bows, spears, and projectile weapons. This is the only army to use birds as part of their army, sending them to spy and even attack from the air.

These numbers do not account for mercenaries, assassins, or Edgemasters who might work within the city. These numbers fluctuate on a daily basis and cannot be accurately counted due to government secrecy.

Education
Education is important for Raven’s Landing… but are concentrated on geography, the air, the sea, and nature as a whole. An adult is expected to judge the weather accurately, as well as know the lands beyond their home from the highest sky to the lowest rock, even if they have never really been there. When it comes to birds, one Is, frankly, almost obsessively knowledgeable, especially about the spcies one has chosen as a companion.


Transportation
Roads and Highways: Most roads and highways are meant for walking with wider paths used for horses and carriages.

Crossroads Gate: set inside a squatter building, this crossroads gate allows for people to travel from the eastern side of the city to Aelindra City and Union City, where once can then travel to any other place they desire. It is kept inside a building to prevent birds from accidentally flying through.

Airship: In addition to crossroads, Raven’s Landing does have airships, far outside the city to avoid the flocks of birds that nevertheless seem smart enough to avoid these huge aircrafts. Mostly used for trade, some do take passengers to other cities.

Notable Residents
Alyssa Saveryn, a spritely old woman whose eagle companion has accompanied her for much of her life.

Past
Originally called Saber City, Raven’s Landing was renamed to more accurately reflect this ancient city’s ways and culture. Built in the early periods of Genesaris’ existence, the birds were once judged to be sacred creatures, and have always flocked here. The city began as a solitary temple to pay homage to these magnificent creatures of the sky, and it was only later when more buildings were erected and homes introduced that people began to attempt to make companions out of these creatures. The first companion bird was that of the beautiful aplomado falcon, for which the army is now named.

It became the idea of the Genesaris government to use birds as form of mail delivery, first using the intelligent ravens and crows and then hawks and larger birds trained with diligence and love. This experiment is now the most common in Genesaris, and mail is delivered by bird to armies, relatives with other birds, and couriers who complete the shipment by foot.