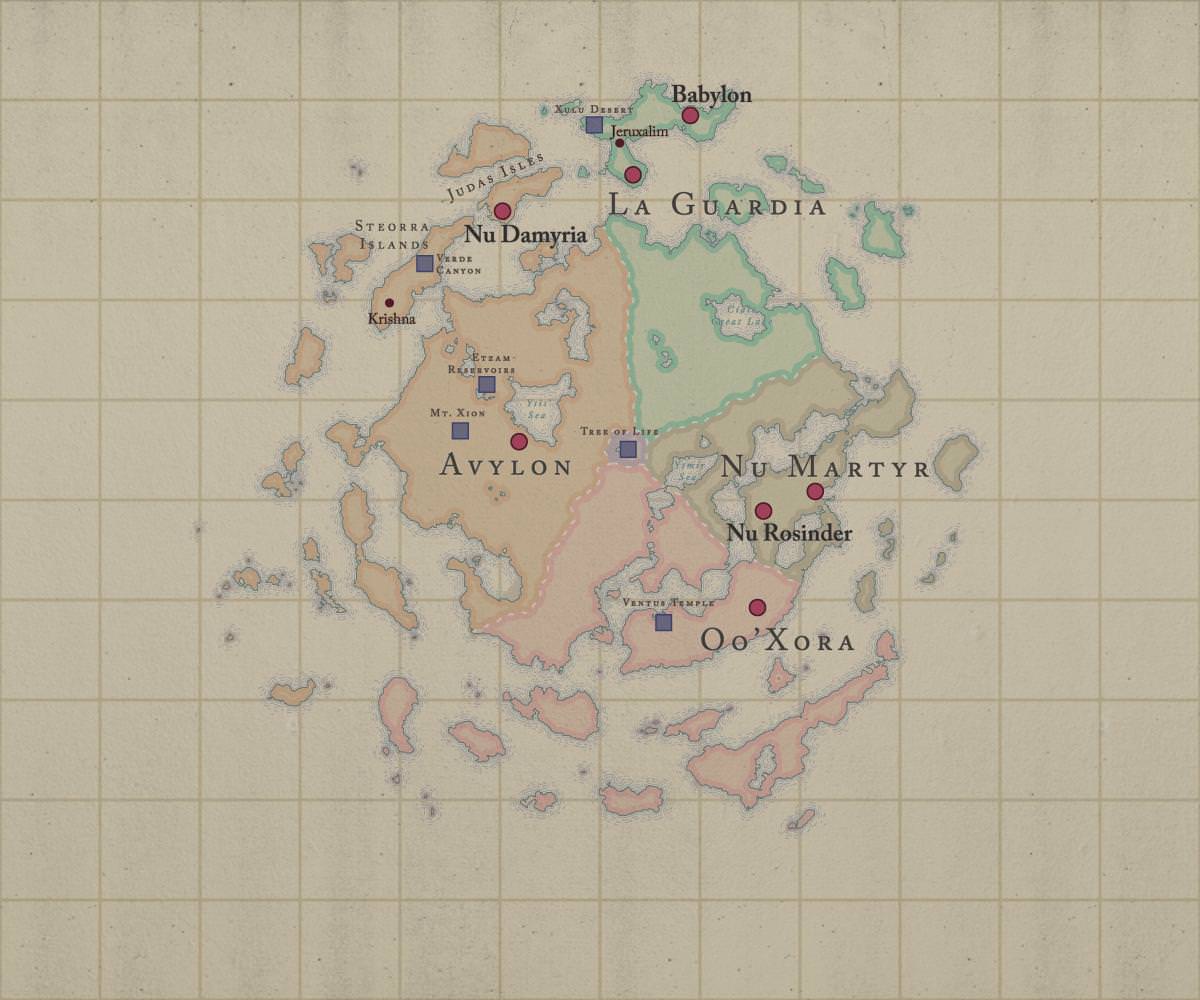 · Long before Renovatio had become a nation governed by Man, the land once dwelled amongst the stars as a cosmic kingdom and was ruled by the Celestial Body. Its size and mass once incomprehensible, until happening upon Valucre where only a fraction of Renovatio's glory has been preserved on said planet whereas the rest of the land exists outside of time and space. Now the mobile kingdom casts shadows over Valucre from the sky
- Renovatio was originally 6+ million square miles. 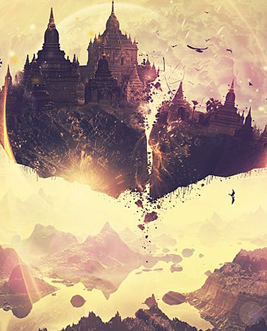 Renovatio is a land that has been through many things in its long life; from plagues to nearly falling out of the sky, the island is no stranger to random dangers. That being said, the people of Renovatio are incredibly devout, believing that the Heavenly Mother Tellus Mater will guide them through their troubles. Tellus being the center of their religion, others do worship her children or those who've fought in her name.

It's this robust belief system that makes the people willed to carry on, no matter the circumstances. Stubborn and often unmoveable, change is a complicated thing for them all. Through the years the issues the island has faced have been due to the inability to accept change, even though Renovatio is known for its technological advances and it's harboring of expansive knowledge. The island has been stuck in a circular movement that's gone only millimeters forward when inches could have been obtained.

Primus, the All-Father, is no longer a person of worship in Renovatio. He is respected and acknowledged, but his figure has been replaced with others from the Pantheon and beyond. This was the first step in going forward after Primera Cartyr took her place as Grand Kommadant after the Halcyon. There was no use for the All-Creator anymore in the hearts of her people, now that another God was taking his place as he left to slumber amongst the stars. Steorra is now a household name throughout Renovatio; various statues built for her, prayers and hymns speaking of her heroism.

Primera made sure her people understood who had indeed helped them from falling out of the sky.

There is relative peace throughout Renovatio, though there are some wishing that change had never happened and that their current Kommadant should not be in charge. No rebellions have been sparked by this criticism and Primera has done nothing to thwart the talk. Thus it is all left to simmer until something does come of it. 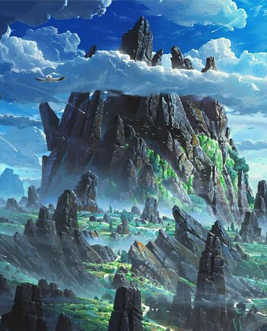 Renovatio as a whole is a mountainous region, if not the greatest in all of Tellus Mater.

It's said that the mountains are created by the shifting and colliding masses of earth; often smaller islands are formed by this dance, leaving them to float lazily above or below the main island. Flatland is nearly nonexistent, making travel in the more rural areas to be extremely difficult for even the most seasoned traveler. Earthquakes still shake through the island, they are infrequent and hardly anything to worry about, but they can be frightening if you're not prepared for them. Renovatio is continually changing, forcing the people to adapt quickly and make do with their current surroundings.

Due to its unique location, seldom does it snow or rain. Winters are chilly, with temperatures dropping as low as -20(F); the winds make some areas of Renovatio hard to reach or dangerous to even be around. Summer, spring, and fall, temperatures shift between 30(°F)-70(°F). Humidity can be an issue if you're not used to it, some aren't even able to breathe being so high up in the air, the additional weight of a wet blanket is often a detriment to anyone's comfort.

Denizens often warn wanderers to be prepared for inclement weather depending on where they choose to travel to. Also, the threat of beasts and playful creatures wandering along unpaved paths can be detrimental to the unprepared. There is no fun in discovering what's already been found! Renovatio is full of mysteries just waiting for anyone to unlock them - there are grand prizes in such curiosity.

An expansive variety of flora and fauna can be found around the island. Most dangerous to even look at and some just pure, their beauty only marked by their ability to grow in the most random of places. You have no warning on what is what, thus you're left to discover for yourself if what you pick and eat or smell will be terrible for your health.

Renovatio is looking for individuals to discover new flora and fauna; this opportunity gives the individuals a chance to affect the island, while also providing proper credit to the appropriate discoverers.

As you travel through Renovatio, you will come to find that it is a patchwork of cities, their people matching the painted picture. Some areas you will see no technology touching it, the people living purely off the land, and then you may find many cities, some so large they've developed micro-economies. There are four significant provinces: Avylon, Nu Martyr, Oo'Xora, and La Guardia, and each one varies from one another in many ways, while also sharing some similarities.

· Renovatio is a cultural superpower stemming from a blend of multiple cultures, one such as Italy and its likeness to the makings of Greco-Roman empires, Religion, and the Renaissance. You may experience something in semblance to the Persian/Middle Eastern culture as well as Japanese culture due to long periods of relative isolationism from the outside world, and it's uncanny resemblance to Edo Japan in specific areas. Renovatio was designed to allow players to settle down and write about pretty much anything they'd like to dabble in without having to search multiple forums/subforums for different genres of role-playing.

Renovatians all have a unique accent; some struggle understanding what a person is saying because of the heaviness of the accent. Latin, Italian, French, Japanese, and Sumerian speaking individuals are scattered throughout Renovatio, but more commonly, a blend of all of the above put a little spin on things. The wealthy speak a mix of Latin and French, middle class prefer Italian, while everyone else chooses to speak what they understand.

The religion of Renovatio is everywhere. Stories of their gods and goddess are often etched into walls, doors; sewn into heavy tapestries and written in long texts. No matter where you can, no matter what a certain city or village may believe, Tellus Mater is the primary religion of Renovatio. She is the Goddes of the land and the creator of all things, without her and her children, Renovatio would not be what it is today. The Gospel of Recreation and the scriptures of Tellus Mater became the two most followed and focal religions in all of Tellus Mater.

Steorra, another figure of worship, was discovered in lost texts most likely hidden by indifferent scholars. Her name is nearly parallel with that of Tellus due to Steorra being an important figure during the Halycon. Through her blessings, the island is still floating and the plague that had ravaged it is gone. Crystals jutting through Renovatio is a sign of Steorra's touch; the crystals are in cities, villages, mountains, and even bodies of water.

Religion has led to an educational system that connects the soul and the mind. Those who seek spiritual enlightenment and the knowledge to unlock the secrets of the omniverse apply to the University overseen by the Zodiac Knights. In more rural areas, or advances cities still caught up in ancient ways educate their populace via trade - whether it's hunting, bartering or through the art of war.

Grand Kommadant welcomes teachers of all sorts to come and bring with them any knowledge they have to offer her people.

Although SOLDAT are seemingly omnipresent throughout Renovatio, it is CUR that oversees National Security alongside with the Overlord and Sovereign of Renovatio. When decisions need to be made this group will convene a moot amongst themselves to find solutions for the expected and the unexpected.

The Holy Order faction is a group of Knights replacing the legendary Commission. The Holy Order answers only to the Director of CUR and their main objective is to protect the Overlord by assigning a renowned Ucissore or a Zodiac Bravada to protect the Grand Kommandant for months or years at a time.

· Coin is Renovatian currency and comes in the form of coin-shaped gems such as diamonds, rubies, crystals, and emeralds. All of which is roughly the size of quarters and are measured in ounces and pounds when making purchases.

All that is known about this unearthly creation is that it is an extension of Exus Prime, manipulated to build the foundation of Renovatio. This resource is not available for trade nor available to the public. It is highly durable and its worth is equivalent to platinum.

Is a combination of Ferro and small samples of Primal Alloy forged by a Sonic Driver. DPA is a common resource and the equivalent of gold in value.

Can be found deep within the bowels of Renovatian mountains, and is very expensive and in high demand. Graviton materia ranges in effects and potency, some records explaining how it endows the user with gravity-defying abilities, like walking up walls or remaining suspended in the air for seconds longer. Outmoded tech still incorporates Graviton as it is the poor man's resource.

is a tall, coarse plant, Cannabis sativa, that is native to Renovatio but naturalized or cultivated in many parts of the world and is the source of a valuable fiber as well as medicine in the form of marijuana and hashish. The tough fiber of this plant is mainly used for making rope, fabric, paper, etc. (wearing cànapa clothing strengthens earth zodiaco materia twofold).

-Lilium-, Grand Mainframe, King and 8 others reacted to this
Sign in to follow this
Followers 2
Go to articles