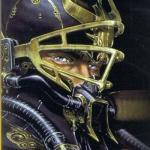 By Vaudevillian, March 7 in Water Cooler